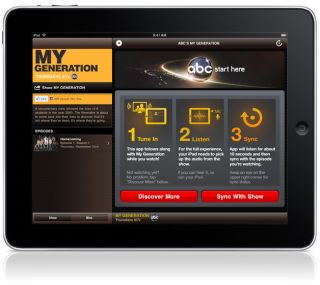 LOS ANGELES and NEW YORK: ABC has released an iPad app that syncs real-time broadcast for streaming on the tablet computer. The free app was built on Nielsen’s Media-Sync platform specifically for the new ABC drama, “My Generation.”

“The app’s sync technology connects your iPad to your TV allowing you to participate in real time with the show,” ABC says at the show’s Web site. “Take polls and quizzes, get behind the scenes info. All in real time. No additional equipment required. Turn on your TV, tune into ‘My Generation,’ launch the app and hit the sync button to get started. You can use the ABC’s ‘My Generation Sync’ app while watching recorded episodes of ‘My Generation’ as well.”

Nielsen’s Media-Sync technology identifies which episode is being watched and where the user is within the show, “to deliver additional content and interaction with the show on your TV,” the site says.

The app also works when the show’s being replayed from a video recording device, and can identify fast-forwarding or rewinding.