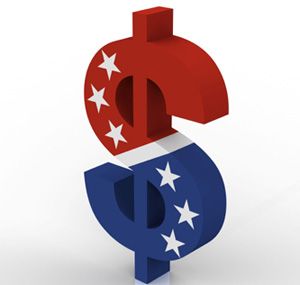 NEW YORK: The electoral extravaganza of 2012 is expected to generate $4.9 billion in political advertising, with broadcast television taking more than half of it, the analysts at Wells Fargo say.

“We consider our forecast to be conservative primarily due to the slow start to fundraising, which we attribute to the fact that no clear Republican Party leader has emerged thus far,” said the quartet of analysts led by Marci Ryvicker.

Broadcast TV traditionally takes between 50 and 60 percent of total political ad spending, and 2012 will be no exception. Broadcasters stand to gain $2.8 billion this year, up 16 percent from the 2010 cycle and 27 percent from 2008. Radio is set to get $256 million.

The 2012 election cycle will comprise 11 gubernatorial and 33 senatorial elections, compared to 37 and 38 respectively for 2010. All House seats will be up for re-election, as is the case for every presidential election year. A total of $6.1 billion is expected to be raised for the 2012 cycle. About 80 percent of the funds raised for campaigns goes into advertising, the analysts said.

Gannett, Sinclair, Belo and CBS TV stations have the most exposure to early primaries, the analysts said. Gannett, which stands to reap 53 percent of TV revenue, has stations serving all five early primary states--Michigan, Arizona, New Hampshire, South Carolina and Florida. Gannett has NBC affiliates in Jacksonville, Fla., and Phoenix; CBS affiliates in Columbia, S.C. and Tampa Bay, Fla.; an ABC in Grand Rapids, Mich.; and an NBC in Portland, Maine.

Sinclair is expected to take as much as one-fourth of the ad revenue generated in races before March. It has stations serving four of the first five early primary states. Sinclair has no stations in Arizona; a CBS affiliate in West Palm Beach, Fla.; a Fox in Charleston and an ABC in Greenville, S.C.; two ABCs and a Fox in mid-market across Michigan; and a CBS in Portland, Maine, on the border of New Hampshire.

Sinclair and LIN are the best positioned over the long haul, with 40 percent exposure to the most “hotly contested” races, analysts said.