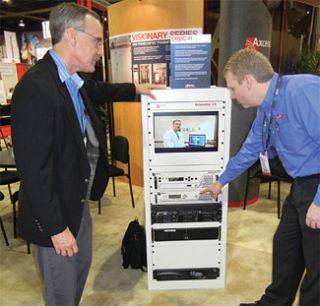 While the modern show booths are neater and streamlined, nothing gets my attention while walking the floor more than a piece of transmission equipment all shiny and new!

From transmitters and remote systems, to highly polished transmission line, the choices this year were abundant.

Egatel showcased its TLE6800 high power liquid cooled transmitters. Also on display was the TE9000MP series, which incorporate power amplifiers based on LDMOS-50 volt technology. If you missed them, check out the RE9000MP series medium power gap fillers, along with the new MTD5000 micro-transmitters for both MFN and SFN networks.

Harris has boosted the power to its MPH ATSC Mobile DTV transmission system via new compression and networking technology from its new Selenio integrated media convergence platform. Harris MPH now features a choice of Selenio of NetVX for networking and compression, Harris Synchrony mobile networking adapter and the Harris Apex M2X exciter and the Roundbox Server.

Linear Industries showcased its Mobile DTV-ready AT8001 exciter, which provides linear and nonlinear pre-correction at the touch-of-a-button. Also on hand was Linear's Gap-filler product line, which improves DTV coverage in areas obstructed by terrain and buildings, or in areas where higher signal density is needed for indoor and Mobile TV applications.

Rohde & Schwarz introduced the AEM100 Emission Multiplexer for ATSC Mobile DTV, which can help protect against faults and outages. A bit-identical signal is applied synchronously to the outputs of two redundant R&S AEM100 multiplexers. If errors occur on one R&S AEM100, the Mobile DTV data stream is switched interrupt-free to the other multiplexer without the user noticing anything on the mobile receiver.

Victor Fernandes (L) of Thomson explains the architecture of the Elite 1000 Green Power transmitter to Martin Fabris of ARSAT in Argentina. Photo by Dawley/KovacsR.V.R. Elettronica introduced the GOLD video TV exciter, the BLUE Digital TV video exciter, and a 50W RMS digital transmitter. Also on display was their direct-to-channel TV exciter and UHF transmitter, featuring modular design and scalability from 5 kW to 20 kW.

Screen Service showcased its SDT-ARK-6 Series DTV transmitter for DVB-T2. It can modulate in any scheme via a software download and can be used as a transmitter, heterodyne transposer, regenerative transmitter and Single Frequency Echo Canceller, all in one box.

Kathrein demonstrated its UHF Super-turnstile Antennas for DTV, along with a UHF Antenna Panel for mixed polarization; circular, elliptical, slant, horizontal or vertical. Also new was the VHF Band III Dipole Antenna, for top or side mount, for DAB.

Micronetixx Communications showed its LPC Series UHF Elliptical and Circular Polarized Antennas. Each antenna is custom built so the customer can specify a vertical component from 10 percent to a full C/P (50/50) ratio. Beam tilts are also offered up to 1.75 degrees.

Propagation Systems Inc. offered up two versions of the UHF Slot Antenna PSILP, a cross-section display of the PSIUSM, and a configuration of its UHF Broadband Panel Antenna PSIUP.

SPX Communication Technology offered up the DLP-V Antenna for mobile. Also new was the TLP-BB Antenna, a side-mounted, lower power UHF antenna and a 6-pole, tunable 470 MHz to 860 MHz 50-W filter. For more power, they had the 4-kW filter for digital and analog TV standards.

Burk Technology introduced the Climate Guard server room environmental monitor, which monitors temperature, humidity, flood, and other environmental conditions. Also on hand was the GSC/VRC IP Converter, which allows integration of legacy GSC3000 and VRC2500 systems with ARC Plus and AutoPilot 2010 over IP networks.

Davicom (Comlab Inc.) showed the MAC Expansion Module, which adds extra I/O capability to any one of its MAC products. Also for review was the Davicom MAC Site Monitoring Firmware 5.41.