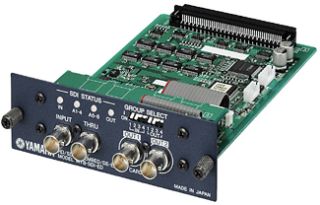 The Yamaha MY8-SDI-ED broadcast interface
SOUTH BARRINTON, ILL.
In August, the Willow Creek Community Church broadcasts their Global Leadership Conference throughout North America via closed-circuit satellite. This year the annual event was transmitted to more than 170 locations, including churches, colleges and other venues. Additional feeds included the audio portion translated into multiple languages. The broadcast ultimately reached an audience of more than 120,000 located in 350 cities in 50 countries, representing more than 10,000 churches.

Time zone delays and Web streaming were also part of the equation. In addition, we feed announcements to our local campus without them being transmitted via the satellite paths, as well as providing feeds for local recording of the event, and “dry” or isolated feeds from audience mics for future remixing.

As you might imagine, the logistics surrounding the transmission of such an event are rather challenging.

Matching video and audio were needed at every conference transmission destination and we felt that the best and easiest way to accomplish this was with the use of embedded audio in conjunction with our SDI video streams. This allowed us to have to route only a single signal for distribution. Embedding would allow us to transmit as many as 16 audio channels with the video and I knew that the overwhelming majority of our destination sites had SDI breakout capability.

The whole process was greatly simplified with the use of Yamaha’s new MY8-SDI-ED HD-SDI broadcast interface card that was just introduced at this year’s NAB Show. It’s compatible with all Yamaha digital mixing consoles and DME mixing engines and provides users with eight to 64 I/O channels, depending on the number of consoles and cards used in the configuration.

KEEPING IT ALL TOGETHER

The card seemed ideal for solving some of our logistical problems. We used it in conjunction with a Yamaha LS9 digital console, which allowed us to take our SDI video and assign embedded audio channels to the console and then patch remixed outputs from the console back into the SDI stream.

We layered-in two channels of processed front of house audio, as well as two foreign language translation channels (Spanish and Korean). As the audio embedding was happening directly at the Yamaha console, smooth source fading and audio adjustments could easily be done across any embedded channel directly from the mixing surface. The single MY8-SDI-ED card that we used accommodated eight incoming SDI audio channels and eight outgoing SDI audio channels and made these available to the console as digital patch options, providing very fast patching and routing.

The LS9 console was fed with all of our audio sources, including the video servers being used to create the two hour delayed feed that we provided for West Coast downlink sites.

With the use of SDI video with embedded audio, we were able to easily manage all of these multiple audio channels. This bundled audio approach allowed any of our receive site operators/viewers to break out the feed that was appropriate for them.

The project was a big challenge and kept us on our toes, but was a lot easier to accomplish thanks to Yamaha’s LS9 and MY8-SDI-ED.

Matt Satorius has worked as an audio systems engineer at Willow Creek for four years. He has also toured with several musical groups as front of house audio/monitor engineer. He may be contacted atmsatorius@willowcreek.org.