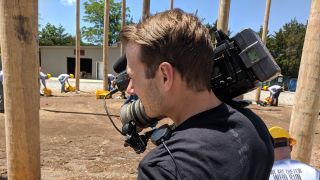 The “Woodwalkers” production team dealt with many of the same conditions as the trainees, and the Blackmagic URSA Mini Pro G2 held up during all of it. (Image credit: Blackmagic Design)

CHATTANOOGA, Tenn.—The docuseries “Woodwalkers” follows a group of determined students as they take on a grueling 15-week training program to become professional lineworkers, constructing and maintaining electric power lines. Working to overcome hardships at home and push through a trying training schedule that can include injuries, dangerous weather and more, the students strive to graduate from the premier Southeast Lineman Training Center in Trenton, Ga. With a new class of students featured each season, the second season of “Woodwalkers” premiered on Amazon Prime in July 2020.

Due to the docuseries style of “Woodwalkers,” and the inherent challenges that come from a lot of the drama happening in real-time 30 feet in the air, it’s imperative that we have reliable cameras that can stand up to the shooting conditions as well as the elements.

As part of their training, the students are put through night storm training, four-hour climbing sessions and even a Navy Seal-inspired crucible event called “Awakening.” That means we’re put through those shooting conditions as well, in the Georgia heat.

We typically shoot for 8–10 hours a day, and most days are in the high 90s to triple digits, with high humidity. With some intense night shoots happening during stormy weather, we were able to mostly shoot at the cameras’ native ISO of 800, sometimes pushing the URSA Mini Pro G2 to 1600 for slow-motion shots, and everything held up really well.

Moving from season one to season two, we were able to step back and rethink our approach, including what shooting package made the most sense for the show’s conditions.

After struggling with a 30-pound camera setup for season one, we knew that a more lightweight solution was needed, especially since a lot of the series is shot looking up and our backs needed a break. As we used several different makes and models of cameras while shooting season one, we also wanted to simplify things and start using matching cameras and lenses for season two so things would be less complicated in post. Battery life was also important, especially since swapping them out wasn’t always easy if we were suspended in the air in a bucket truck, capturing the students high up on the poles.

We ultimately selected the URSA Mini Pro and URSA Mini Pro G2 cameras because of their ease-of-use and image quality. We really liked the ability to use off-speed frame rates for slow-motion shots, and filming at 120 fps on the URSA Mini Pro G2 while still using the full sensor was incredible. Also, having built-in ND filters allowed us to keep our lens iris very wide, helping to produce a more dramatic and cinematic image for the docuseries. It’s also great that our batteries lasted 1.5–2 hours, as opposed to burning through them every 30 minutes with the larger camera setup from season one.

The cameras delivered exactly what we were looking for, so we continued using them and the Angenieux EZ-Kit lenses for season three, which is currently in post—stay tuned!

Jonny Ginese is a DP, producer and lead editor at Super Chief LLC, a Tennessee-based production company focused on documentary storytelling, feature length films and other unscripted storytelling. He can be contacted at jonny@gosuperchief.com.