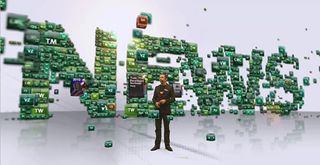 Vizrt will show broadcasters how to engage the home viewer by letting them be part of the live newscast, and triggering real-time rendered graphics from iPads with a second screen app. The show, which will run every half-hour, will include on-air talent using the latest multi-touch screens, iPads, immersive graphics, and real-time rendered content to tell a compelling story.