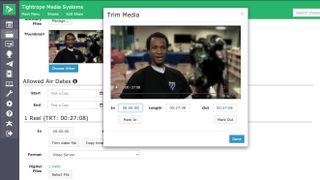 With the v7.2 software, Cablecast can ingest NDI streams from NDI-enabled systems from anywhere on the network, Tightrope explains. This expands Cablecast’s flexible support for bringing live, network-based input sources into the platform for recording or broadcasting without an external decoder.

The Cablecast platform’s IP support has been further optimized with this update to directly encode network streams or files for subsequent playout without typing up a baseband recording channel on the server, per Tightrope.

The platform’s new virtual clip editing features enable users to cut out non-essential sections of a recorded program without needing a second editing system or creating multiple versions of the file. This includes the File Trimming and File Linking functions, which allow operators to mark in and out points within the recording to define sections. The new linking feature also enables a single shared file to be incorporated into multiple shows in the scheduler.

Taking it a step further, a feature of v7.2 allows users to skip recording entire sections by pausing and resuming recording during specified periods.

Another feature is an updated Tags field that allows multiple defined values in a single field.

Cablecast v7.2  is available for users of Cablecast VIO and Cablecast Flex media servers, and is free for Cablecast customers on active support agreements.