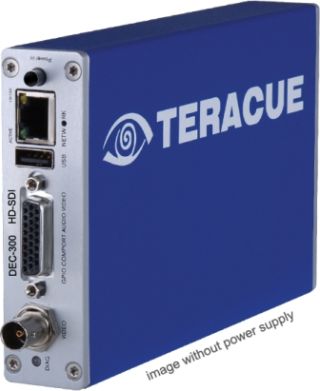 The company will introduce its DEC-300 HDSDI Decoder, part of Teracue’s ENC-300 Series and DEC-300 Series H.264 HD/SD encoder/decoder product line. The DEC-300 HDSDI Decoder targets compact, mobile low latency broadcast and CDN video IP contribution and internet streaming. The units are extremely robust, have an extended temperature range, contain no moving parts and are noiseless when operated as PORTABLE device. The units are available for shipment as standalone portable device as well as in the FR-610 frame for up to 6 blades in 1RU.

Also in the Teracue booth is the DCH Series, offering all-in-one DVB-to-IP/ASI Gateway, ASI/IP-Decoder and DVB/ASI/IP-Remultiplexing and PID Remapping. The compact multisignal and multiformat SD/HD processor targets Broadcast, Headend and OB-Van environments. The DCH series provides an extensive variety of signal inputs and outputs, such as HD/SD-SDI, HDMI, AES-EBU, analog Audio-Video along with ASI and IP interfaces.

Also on hand in the company’s booth are its DMM Series DVB-to-IP Gateways for redistribution and streaming of free-to-air and encrypted DVB channels, which now supports the operation of two conditional access modules (CAMs) per DMM blade, for even higher density TV streaming. One single DMM blade can bridge up to 32 TV/radio channels onto the network as multicast/unicast, UDP/RTP, MPTS/SPTS live streams. A new 1RU DMM frame is now available which can hold up to 2 DMM DVB-to-IP gateway blades, next to the known 4RU frame which can host up to 8 DMM blades. The DMM series supports DVB-S/S2, DVB-C, DVB-T/T2 and ASI inputs.