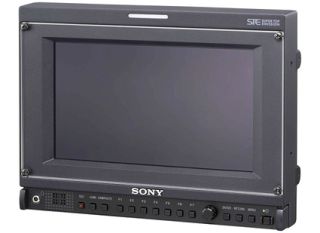 Sony PVM-740
EAST GREENWICH, R.I.—I've shot for a wide array of broadcast TV and video production projects, so I know what to expect from a production monitor.

In my line of work, high-quality monitoring is especially important, particularly when shooting in the studio. Often I have to rely completely on a studio monitor for framing and composition instead of the camera's viewfinder or flip-out LCD, as my camera is usually mounted on a prompter system, and is usually too high for me to see easily into the viewfinder. So, having a high-quality monitor in the studio that I can trust is critical.

comparison with a 17-inch studio monitor that I've been using for the past few years.

To get a feel for the monitor I liked best. I kept them on C-stands to determine which one I naturally gravitated to. I absolutely loved the picture on the 740; it really looked fantastic. In our studio work the typical set-up is a high-key white background—think of Apple's TV commercials with their white backdrop. Often the monitors that I've used really can't handle the high contrast of the set and still reproduce nice flesh tones. I usually have the white backdrop lit to the extent that it's almost "blown out," and sometimes the talent's flesh tones don't look that great on the studio monitor. What the camera is picking up is a different story, but on the monitor the flesh tones usually look way too dark.

WHAT YOU SEE IS WHAT YOU GET

With the new Sony OLED 740, I found that the entire frame looked really great—no more bad flesh tones. The monitor showed me the scene just as I expected it to look in post, and the OLED technology handled that contrast of the bright and the darks so much better than the other monitors I've used.

In addition to the brilliant image quality it produces, the monitor also includes quite a few useful features, such as a built-in stand, and the ability to be powered by a normal camcorder battery. In fact, even when I was using the PVM-740 for the studio shooting session, I never plugged it into AC power. It ran very nicely all day on a single PL-G90 battery.

I was also impressed with how easy the menu system with its assignable buttons was to use. I easily programmed several of them for changing certain menu settings and have to admit that I've never done this with monitors before, as the interfaces just weren't that user-friendly.

The Sony also has the heft and feel of that comes with a very rugged monitor—it's perfect for the field. When I need a small high-end monitor out in the field, I'll be taking the Sony along with me. Also, from a contrast and image quality standpoint, it looks fantastic. Of course I knew it was going to look great even before I got it and I was not disappointed.

Doug Jensen is an award-winning video production professional with more than 30 years of experience in the business. He may be contacted at doug@vortexmedia.com.

For additional information, contact Sony at 201-930-9000 or visit www.sony.com/professional.