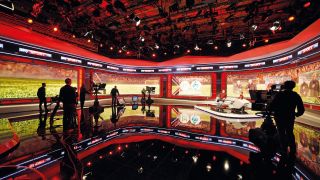 However, this tremendous output requires an enormous effort in technology, equipment and, of course, many employees. At first glance, it is hard to imagine the capacities and technical work involved in this project.

Qvest Media, a German-based broadcast systems architect, was responsible for the technological planning and system integration. For their ambitious project, Sky only considered the best technology currently available on the market.

To ensure that the equipment ran smoothly and around the clock, high availability, reliability and redundancy were essential. That’s why we chose G&D KVM products for the broadcasting center’s IT infrastructure, since they serve as the backbone of the entire IT system and make it possible to move computers into a central server room.

In order to meet the demands for security, redundancy, workflow facilitation and give individual production teams the ability to collaborate on live reports, we developed a fully redundant structure of the production and operating computers, which also included removing them from studios, control rooms and post production.

Two completely mirrored, redundant G&D matrix switch clusters, each consisting of a ControlCenter-Digital 288, were installed in the central equipment room to provide redundant access to the various user and computer modules of the individual systems. If—in the event of a fault—switching via one of the two matrices is not possible, the second matrix is used automatically. Thanks to full redundancy, the production teams can continue to work without interruption.

The central equipment room houses approximately 100 high-performance computers, which play their part in ensuring that the Sky program runs around the clock. All systems—such as ingest servers, video servers, studio automation servers, servers and clients for graphics systems, teleprompters, servers for camera robotics, general configuration servers/clients and servers for broadcast automation—we have now been separated from their users, who can access them via KVM.

WORKSTATIONS AND THEIR TECHNICAL EQUIPMENT

In order to promote collaboration and efficiency in the broadcasting and production center, all video and program control rooms, as well as ingest, playout, graphics department and several studios, are now almost computer-free. Access to the remote equipment is via KVM, in which receiver modules (CON units) for DisplayPort and DVI were installed at the workstations.

The KVM matrix ControlCenter-Digital has been integrated into Lawo’s VSM broadcast control and monitoring system to ensure uniform control and to simplify multilevel, complex processes. Thanks to G&D’s IP-Control-API, the VSM controller communicates with the KVM matrix and can execute any switching commands such as simultaneous switching of different program requirements or exchanging setups between several control rooms.

With their own production and broadcasting center, Sky Germany gains maximum flexibility and even more freedom for future in-house productions. Individual workflows have been improved, making everyday production easier. Moving the equipment into a central server room has significantly reduced noise levels in studios and control rooms as well as the maintenance requirements for IT administrators.

Find out more about Qvest Media at www.qvestmedia.com.