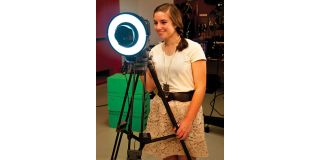 I’ve been anxious to get my hands on a “ring light” for quite a while. Having a dimmable source of illumination right next to your lens has to be a perfect lighting solution. Not only will you add a bit of brightness, but you’ll also get that sparkle in the talent’s eye. Recently, I was fortunate enough to be offered Rosco’s new LitePad Loop Pro Kit for review, and I had plenty of projects in line waiting to see if it lived up to my expectations.

FEATURES
The LitePad Loop itself is a nine-inch diameter ring light with 5,800 degree K LEDs beneath a white plastic ring consuming a miniscule 24 Watts of power. The device is powered by an AC adapter, cigarette lighter adapter, or an eight AA battery DC power supply, and the 2.5-pound unit has a life span of some 60,000 hours.

The contents of the laser-cut foam kit included a color filter pack with eight filters (CTO [color temperature orange] and diffusion), a fader dimmer, AA battery pack, a mounting assembly, four-inch and eight-inch adjustable rods, a light stand plate and an AC transformer with an assortment of power plugs for various countries.

The opening of the “Loop” lighting fixture is large enough to accommodate just about any lens that’s less than 300 mm in focal length, and the mounting bracket attaches firm to the Loop via a powerful magnet. The device’s dimming ability allows you to use the loop full-strength if you’re shooting outdoors, and add fill or partial strength illumintion if you’re indoors and close to the talent.

IN USE
I used the LitePad Loop for several photo shoots, as well as in a video production project. The soft diffused light emitted is perfect when shooting people. For the photo portion of my evaluation, I used a Nikon D700 with a 24-120 mm lens. The shorter rods supplied with the kit allowed the lens to poke through the Loop and I could easily add CTO filter rings when shooting indoors.

Attaching the Loop to the camera couldn’t be easier. The strong magnet instantly grabs the mounting assembly and sliding the thumbscrew up or down creates a perfect fit with the Loop itself. Plugging in the 10-foot cord to the dimmer assembly and the other attached cord to the power supply is all it takes in the setup process. I really appreciated the on/off switch located on the battery holder, and also the on/off toggle switch on the Loop as aides in warding off battery drain. Instant power-up with no color temperature shift when dimming reminded me again how much I really enjoy working with LED lighting devices.

The indoor shoot on a tungsten-balanced set required the use of the one-half CTO gel to convert the daylight color temperature of the Loop closer to that of the tungsten lighting, but this was not unexpected and not really a problem. At a distance of six feet from the talent, I needed the Loop to operate at full power (designated as “10” on the dimmer control), as I was shooting through the light attenuation produced by the CTO filter. I noticed that the telltale ring of LEDs appeared in the talent’s eyes and the partial CTO filter was just warm enough to help her skin tone. I was aware—going into the shoot—that LEDs have a rapid light falloff, but what other type of illumination source can you use all day without baking the talent?

Outside it was another story. Using the AA-battery power source for the Loop, and shooting at a distance of about three feet from the talent, our shaded location was still too bright for the Loop to make any difference, except perhaps to add a bit of twinkle in the talent’s eye. Moving the rig closer to the talent helped somewhat; however, even in full shade, the Loop doesn’t really have enough “punch” to compete outdoors.

During my video shoot, I switched to the Canon EOS 5D Mark II and used both the 24-70 mm and 70-200 mm f2.8 lenses. This change in cameras necessitated using the eight-inch rods supplied due to the overall length of the lens. The only lighting in the scene came from a 200 Watt “Inky” and a 750 watt “Tweeny.”

With the actors lit, I mounted the Loop and used it without diffusion (even though the color temperature was cooler) at the full power output setting. The blue cast of the Loop added a slightly cooler quality to the actors’ complexions in the tense scene I was shooting. This is where I found the Loop to be perfect—it produced a cooler overall cast and provided an eye light for the actors. This is the real reason that I wanted a ring light in the first place. When you have to shoot close to your talent and need a little extra soft illumination, mounting a lighting instrument around the lens of the camera is really the only way to go.

SUMMARY
Adding a little extra fill illumination is what the LitePad Loop is designed to do. When the extra filters are employed, it becomes a variable color temperature source that I found to perform flawlessly in close quarters, operating with either AC or DC power soources.

Chuck Gloman is an associate professor and chair of the TV/Film department at DeSales University. He may be contacted at chuck.gloman@desales.edu.

PRICE
$1099 MRSP, as supplied for this review