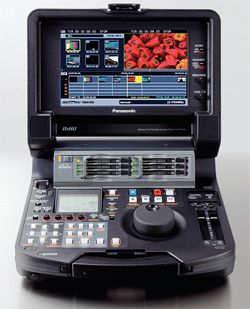 Panasonic's HPM200 Mobile HD Field recorder
CLEMSON, S.C.
The mandate of Clemson University's Video Services department is a broad one. It encompasses the production of coaches' video for football, men's and women's basketball, production assignments for some 19 varsity sports, the creation of Web and large screen signage, and the Webcasting of games.

For the past several years, we've been acquiring our images with Panasonic's P2 and P2 HD camcorders, including the VariCam 2700, and an assortment of P2 HD shoulder-mounts and handhelds. We're consistently impressed with the performance of these camcorders, and we've moved into some pretty sophisticated tapeless production techniques. The one piece of field gear that sees the heaviest use—and is absolutely essential to our overall operations—is the P2 Mobile HD field recorder/player.

We were early adopters of this product, initially purchasing one unit, which we assumed would be sufficient for our needs. This proved not to be a good assumption, as we typically have our five staff members going in five different directions, with each trying to walk out the door with a P2 Mobile. We soon corrected this and now own a half dozen P2 Mobiles, four AJ-HPM110s and two of the latest iteration of the product—the AJ-HPM200.

With AVC-Intra and DVCPRO HD standard, as well as optional AVCHD compatibility and expanded input/output connections, we feel that the HPM200 is the most comprehensive and versatile master-quality HD field recorder out there. It can be used with just about any camera and offers 10-bit independent frame 4:2:2 quality recording in a variety of high definition formats and frame rates, including 1080p (native), 1080i and 720p. And it also records in standard definition DVCPRO50/25 and DV.

This football season we've brought along an HPM200 fully loaded with six 64GB P2 cards to all our games. We put it in the network video production truck, and record a direct feed with embedded audio through the P2 Mobile's HD-SDI input.

We're now able to edit play lists and spit out a copy of the game on DVDs for the coaches faster than ever before. With the HPM200's enhanced editing capabilities, we're able to accomplish this without ever involving our Avid system.

At our most recent football outing—the Gaylord Hotels Music City Bowl in Nashville—we loaded the HPM200 with six P2 cards and one 32GB SD card, and were able to make high-res (P2 HD) and low-res (AVCHD) copies of the game simultaneously.

During the football season, the team meets every Friday night to view a highlight reel. We record that content on a P2 Mobile, and carry it to the meeting room along with a projector and two powered speakers. We also use a similar setup for presenting highlights at player and alumni banquets.

At our home basketball games, we've run up to three P2 Mobiles from a DNF controller to provide live HD replays, a new capability for us.

We also use the P2 Mobile's up/down/cross conversion quite a bit, as it's flawless and so clean.

Virtually everything we do runs through a P2 Mobile. It's safe to say that we don't leave the department to produce a video without one.

Rick Babgy has served as Director of Video Services at Clemson for the past 12 years. He may be contacted atrbagby@clemson.edu.