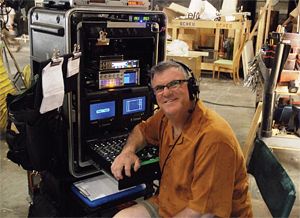 Joe Foglia
WINDERMERE, FLA.
One of the things that I’ve learned in my 20 year career is that when you’re a television actor on a high-profile weekly drama, you want to look great on camera and sound great as well.

For the past two years, I have been working as the sound production mixer for ABC’s one-hour murder mystery, “Castle,” and it’s my job to accurately portray the romantic tension and witty repartee between the main characters. Capturing the perfect audio is not always easy in this case, given our rigorous shooting schedule and the rather close proximity of the actors when they’re speaking to each other. In such situations, I’ve found by long experience that having the right audio equipment can make all the difference.

When you’re attempting to capture the playful and intimate banter that occurs in this particular show, the task can sometimes be challenging. This led us to apply multiple Sound Devices products to get the job done right. I’ve used several of that company’s products in other TV show audio applications and found that they always exceeded my expectations. The company stands behind its service and also offers constant firmware updates so the products that you purchase don’t become obsolete overnight.

On the “Castle” set, we’re now using Sound Devices 788T and 744T digital recorders, a 552 production mixer and a CL-8 controller. One of the many benefits of the 788T is its ability to simultaneously record to multiple devices. This is really helpful on a show such as “Castle.” We also like the product’s Compact Flash recording capability too. We just insert a CF card into the 788T, hit record, and when the scene’s over, the post production editor can take the card and immediately download it to the dub stage. I also really like Sound Devices’ ability to record broadcast .WAV files, which is not only convenient on-set but later in post production.

ONE SIZE DOESN’T FIT ALL

In addition, I have a separate on-location rig, as ”Package A” is designed specifically for on-set production and is too cumbersome for most field recording. This third setup includes a Sound Devices 788T and a CL-8 controller. When shooting on location, I simply attach the CL-8 to the 788T. Along with my ENG bag, I have everything I need to capture dialog when working in the field.

Sound Devices’ intelligent designs and product flexibility provide the tools needed to accurately record a high-profile show such as “Castle,” And we’re planning to incorporate even more of their wonderful technology.

Joe Foglia is an Emmy-winning and multiple Emmy-nominated television sound production mixer, who’s also worked on “Miami Vice” and “Scrubs.” He may be contacted atjoefoglia@earthlink.net.

For additional information, contact Sound Devices at 608-524-0625 or visitwww.sounddevices.com.