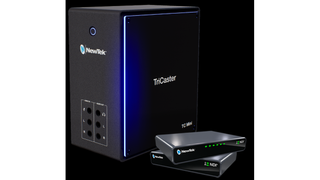 One of the new features offered by the update is Live Story Creator, which allows an individual to run an entire production from a Microsoft Word document, NewTek says. A script built in Microsoft Word includes trigger actions when loaded into the TriCaster Mini 4K.

There is also LivePanel, which introduces a customizable, browser-based remote control of the TriCaster Mini 4K from anywhere on the same local area network. This enables anyone to control live switching, compositing, mix/effects, media playback, audio, automation and more from devices like a tablet, smartphone or laptop. Configurable macros are also now supported.