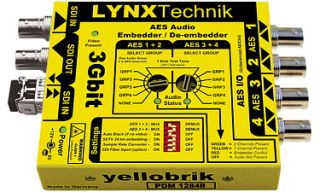 The PDM 1284B functions as either a four-channel or two-channel AES embedder or de-embedder, while the PDM 1284D provides simultaneous embedding and de-embedding for four AES inputs/outputs.Both automatically detect audio formats and deactivate the sample rate converters to preserve encoded bit streams, such as Dolby E.

The PDM 1382 analog audio embedder/de-embedder selectively de-embeds four channels within any audio group of an SDI video signal to any of the analog outputs.It can simultaneously embed up to four channels of analog audio replacing the previously de-embedded audio and/or adding audio into the SDI output.