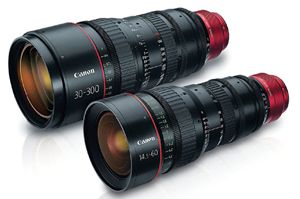 SEATTLE—Premium zoom lenses that push the $100,000 price point are a necessary part of a top-of-the-line digital cinema camera package used for imaging to be displayed on a big screen. Such costly optics may seem to have little relevance to the workhorse video cameras deployed by television news, documentary and production crews.

Well, yes and no.

First, what is it about the single-sensor, 35mm format digital cinema lenses that make them all that special?

SCREEN SIZE MATTERS
“The trend for the large format cameras to higher resolutions [4K today and even 8K in the future], places increasing demands on optical performance of associated lenses,” said Larry Thorpe, Senior Fellow, Imaging Technologies & Communications Group, Professional Engineering & Solutions Group, Canon USA. “Given that these cameras are used increasingly for moviemaking, the implications of very large screen portrayal of the final imagery demands that optical performance attributes must be of an exceedingly high quality.”

Thom Calabro, director, marketing and product development, Fujifilm North America Corp., Optical Devices Division, pointed to a number of differences between displaying on a 40- or 50-foot theater projection screen and a 40- or 50-inch home screen.

“One is how much more apparent chromatic aberration [where the lens doesn’t converge red, green and blue colors to the same point] is,” he said. “And another is flatness of field for illumination, where the image in the corners of the frame is not as bright as in the center.” And he also noted that resolution is more important on the big screen.

And then there’s the difference in the environment between the theater and the home. Where home viewing generally has a screen surrounded by distractions like a textured, painted wall, with pictures and such surrounding it, all well illuminated, in the theater the screen dominates, and is generally surrounded by near darkness. Image errors, including those caused by lens deficiencies, are much more apparent in the theater.

RE-EXAMINE EVERYTHING
To develop the next-generation lenses for digital cinematography, lens makers spent heavily on R&D. “[To realize 4K and beyond performance], a new optical platform was developed by Canon that encompasses new design strategies, new glass materials, new optical coatings, and further refinements to precision optomechanics,” said Thorpe. “Virtually every aspect of related optical sciences had to be re-examined.”

According to Thorpe, here’s what’s in it for those working a level or so down from the moviemakers: “Collectively these advances will all be exploited to further the overall performance of future small format lenses.”

The Fujinon PL 19-90 Cabrio (ZK4.7x19) features an exclusive detachable servo drive unit, making it suitable for use as a standard PL lens or as an ENG-Style lens. Calabro points to a concrete example of where a development for Fujifilm’s Premier lens product line has recently been incorporated into lenses used in broadcasting.

When Fujifilm took aim at the level of lens performance necessary for 4K and beyond digital cinematography, they redoubled their efforts on aspherics. “Now we’ve gotten that technology down, [and in addition to our Premier lenses], we just introduced it in our PL 19-90 Cabrio lenses.” Look to see adaption of aspheric elements in a wide range of HD broadcast lenses in the future.

Calabro also pointed to its three floating zoom groups technology and its high transmittance optical coatings (HT-EBC) as two other dividends of top-of-the-line lens R&D that are beginning to be utilized in broadcast lenses.

SOME THINGS CAN’T BE CHANGED
However, digital cinematography lenses cost a lot for a reason, and not everything that goes into making them can be expected to trickle down to lenses that cost 1/10th or so the price.

“I just think that the level of performance is not practical [in lower cost lenses],” said Calabro, pointing out that lenses that push $100,000 are intended to match the performance of cameras such as Sony’s F65.

Thorpe pointed to the beamsplitter used in broadcast cameras as a physical barrier to adapting all of the top-shelf technology developed for digital cinematography. “Lens design for three-sensor cameras must pay close attention to the optical characteristics of the prism beam splitter in these cameras,” Thorpe said. “This poses unique optical design challenges that are absent in the single sensor lens-camera system.”

Expensive digital cinema lens features such as an 11-blade iris, which provides the much desired out-of-focus blur in an image (referred to as “bokeh”), may not survive the cut when it comes to paring the cost of a broadcast lens to what the market will bear. The ability to provide a maximum aperture throughout the range of the zoom may also be sacrificed.

One surprising fact to note, according to Thorpe, is that requirements for resolution are actually higher for broadcast than for digital cinematography lenses. “In terms of resolution, the large 35mm format design is actually less challenging than that of the 2/3- inch format. The latter calls for high contrast to be preserved out to 100 LP/mm [line pair per millimeter] for 1080-line HDTV, whereas it only requires in the neighborhood of 40 LP/mm for the 35mm lens for HD (because there are many more millimeters in that image size). That becomes 80 LP/mm for 4K, which brings it closer to the demands for 2/3-inch.”

In spite of the fact that few TV studio and field cameramen will get their hands on a digital cinematography lens, they can be assured that many of the features developed for those lenses will be incorporated into the next generation of lenses that they put to daily use.