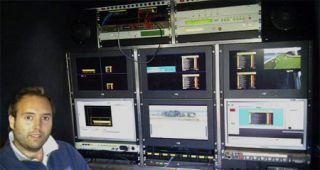 We won our first golf contract in 1997, and since then we have provided graphics and scoring facilities at six Ryder Cups, 11 Open Championships, and more than 1,000 other golf tournaments for the European Tour, the Asian Tour, the One Asia tour, the China Tour, and the LPGA. For any kind of sport, MST provides data and analysis for competitors, organizers, and some of the world’s leading broadcasters, including BBC, ABC, SKY Sports, ESPN, Turner Sports, Eurosport, TV Asahi, and the Golf Channel, to name a few.

In August 2010, to bring real-time 3D graphics into our service offering, we decided to start replacing our existing graphics platforms with newer and more powerful systems. We wanted a future-proof solution, so we chose a product that also supports stereoscopic 3D graphics at an affordable price.

We’ve invested in four Chyron HyperX3 and HyperX3.1 on-air graphics systems, as they met these requirements best and were capable of interfacing directly with our own software. Because they’re such well-known products, the Chyron systems also give us the flexibility to use experienced freelance operators and designers to design and build the graphics within Lyric, thereby freeing up internal developers to concentrate on developing future products and additions.

Our first Chyron installation was a dual-channel HyperX3 with Lyric, which SKY Sports used as their character generator for European Tour Golf. One channel was dedicated to custom CG-operated graphics, and the second was controlled by bespoke MST SYSTEMS software integrated using the LEIF protocol to drive leader boards and all other live scoring graphics.

Our largest project using Chyron so far has been to provide BBC Sport with scoring graphics on Chyron.

The first event was the PGA Championship at Wentworth Golf Club in May 2011. For this event, we used three dual-channel HyperX3 machines running MST software, again heavily integrated with our software via the LEIF protocol.

We also used proprietary preview software – which we developed specifically for the Chyron systems – to allow one dual-channel HyperX3 to provide independent previews of each channel in HD. This solution enables the single machine to be controlled independently by two operators, each of which works remotely using TCP to provide graphics as required. These operators simultaneously controlled our legacy graphics systems to provide graphics in multiple styles to accommodate both SKY Sports and the world feed.

We used the integrated system combining our software and the Chyron systems for the first Power Play Golf event (powerplay-golf.com) at Celtic Manor, and we’ll continue to depend on the system for remaining Power Play events in Asia and the United States this fall. We’ll also be bringing it to the Scottish Open Championship, as well as The 140th Open Championship at Royal St George’s Golf Club.

As our business grows, the Chyron systems give us the capability to offer realtime 3D graphics on a stable and well-supported platform. The integrated system combining MST software with HyperX systems has performed perfectly in all recent events, and we plan to move all of our graphics facilities – including all European Tour Graphics, the Ryder Cup and Solheim Cup, and the World Touring Car Championship – over to Chyron systems within the next two years.