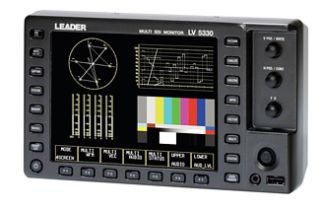 BURBANK, CALIF.—Every production is important, but when we at Band Pro decided to take Sony’s new F65 digital motion picture camera on a fast-paced demo shoot in Hawaii, the stakes were particularly high. The camera had only been released a few weeks earlier and our footage would be some of the first high-end images to be released outside of Sony. The end goal was a short documentary to debut at this year’s NAB Show.

The Leader LV5330 The concept was to capture the natural wonders of the islands, primarily from helicopters at 4K resolution. Pulling focus at high resolutions becomes extremely critical, especially when using fast lenses. Our schedule included a number of sunrise and sunset shots where we might only have one chance to get it right. With these factors in mind, I chose to take a Leader LV5330 monitor into these harsh and exacting environments to pull focus and monitor exposure.

While soaring along the Ne Pali coast, over active volcanoes, and through jungle canyons, I sat in the back of the helicopter holding the LV5330 in my lap and used the monitor’s 1:1 display mode and the F65’s pixel-to-pixel zoom to make sure that the shots remained in focus during tight situation, switching back and forth between 1:1 and the waveform view. When needed I could switch to the Cinelite setting to double check the waveform and get a more rounded, three-dimensional view of the scene exposure.

I wasn’t the only one in the helicopter with a Leader monitor. I also brought the larger Leader LV5380 for our DP/director, Ruben Carrillo, to use while controlling the camera on a Tyler nose mount. He usually had it set to multiview mode to display the picture and waveform simultaneously. As I trust Leader’s scopes, and we had the information right at our fingertips, Ruben and I were able to have detailed conversations about the exposure with the confidence that our monitors were giving us identical results.

Occasionally during the shoot we would land the helicopter, grab camera gear, and hike out into some very treacherous terrain. For all these ground operations I chose the more lightweight Leader LV5330 as our onboard monitor and mounted it with a Noga Arm. The monitor encountered damp jungle and salty spraying coastline, but the true test for all of our gear was the lava field.

TRIAL BY LAVA AND STEAM

Ruben and I carried the camera onto a wind-swept lava field to within 10 feet of a red-hot active flow in the pouring rain. The air temperature was about 150 degrees and the rain was immediately turning to steam as it hit the lava surface. It’s hard to image a more challenging shooting environment. We faced extremes in all four of the classical elements: earth, water, air and fire. I was wondering who would give in first—us or the equipment. As it turned out, the monitor and camera were rock-solid the whole way through and we came back with some amazing footage for presentation at the Band Pro NAB Show booth. The leader monitors played a big part in ensuring that we got this once-in-a-lifetime footage right.

Randy Wedick is a technical consultant at Band Pro Film & Digital. He educates and advises customers in all aspects of imaging and workflow. He may be contacted at randy.wedick@bandpro.com.

For additional information, contact Leader Instruments at 800-645-5104 or visit leaderamerica.com.