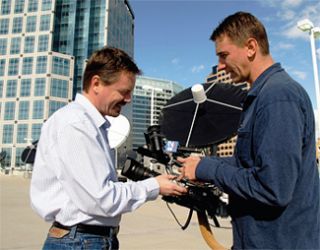 Donovan Reese (L) and lead photographer Kurt Smith display one of KUTV's JVC GY-HM700 ProHD camcorders. Photo by Scott Jones
SALT LAKE CITY
KUTV is the CBS affiliate here and is a Four Points Media Group station that's managed by Nexstar Broadcasting Group. Our station's local news operation, 2News, went HD in 2008, but like many other broadcasters, we didn't immediately make the transition to HD field acquisition. That's changed with our move to JVC ProHD GY-HM700 camcorders for our high-definition ENG, and this has greatly improved our on-air look and workflow.

When my photographers first began using the GY-HM700 camcorders, they were a little hesitant, as they were used to our old and bulky equipment. However, it was quickly apparent that JVC camcorders were the real deal. While they may be lighter than other camcorders, they're built to withstand the rigors of ENG. They also have intuitive controls and menus, which makes it easier for shooters to access the features they need.

We purchased 16 of the JVC GY-HM700s to replace our older tape-based units. We received them in early December last year, and by January we were using them exclusively.

I estimate that the move to JVC will reduce our technical maintenance and repair budget by some 30 percent. We have eliminated a lot of the high costs associated with maintaining our previous equipment, as there are no moving parts in the storage portion of the GY-HM700 camcorders. This translates to no more tape head issues on cameras or playback decks.

Another advantage of the JVC design is its use of non-proprietary SDHC solid-state media cards. In this economy, price is important and we wanted to stay away from proprietary media. SDHC cards are so inexpensive that we're able to allocate seven 16 GB cards to each camcorder. Needless to say, we've never had an issue with storage, but it's nice to know we can buy recording media at many local outlets if we ever need it.

We record native Apple Final Cut Pro (.MOV) files with our new camcorders. With FCP in the KUTV newsroom, this is a big advantage for us—we can start editing immediately, as we're not transferring or transcoding footage. This is really one of the smartest new features I've seen on a camcorder since the introduction of nonlinear editing, and it was a big selling point for us.

Our new JVC camcorders are also part of an overall station move to a file-based workflow, which began with the upgrading of our internal edit bays. File-based assets go into folders on our 34 TB Omneon MediaGrid shared storage system for editing. Any material to be archived is recorded on Blu-ray media and managed the same way as our old tape archives. Eventually, we'll move away from a physical archive to a nearline storage and archive system.

However, workflow advantages and lower maintenance costs aren't much of an advantage if your camcorders don't deliver excellent imagery. The picture quality from our JVC GY-HM700s is definitely top notch. We're using the camcorders with the Fujinon TH17x5BRM lenses that shipped with the cameras. While price may have been one of the initial considerations when we first looked at JVC ProHD, the picture quality was one of the main reasons why we chose JVC ProHD.

Donovan Reese is the director of engineering for KUTV. He has been working for Four Po ints Media Group for four years and has been employed in the video industry since 2003. He may be contacted atdreese@kutv2.com.