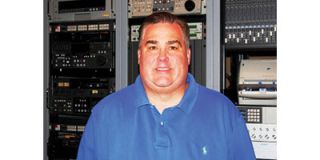 David Kearnes BROKEN ARROW, OKLA.—Kodiak Mobile Television is a mobile production company that Paul Bronsteader and I started in 2011, four years after we launched our sister company, Kodiak Production Group. Since then, we’ve produced numerous posted and live events across the country.

A TRUCK OF OUR OWN
After a few years of contracting and using other trucks, we realized that building our own mobile unit—one that could support both live productions and edited programming— could help us streamline operations and reduce overhead. Last December, we rolled out our first production truck, Grizz HD, which is now on the road covering college and NBA basketball, NCAA Gymnastics, Grand Prix swimming and MMA projects.

The truck is equipped with all of the latest production and editing equipment, with a lot of AJA gear, including FS2 frame synchronizers, Ki Pros, Ki Pro Racks, a range of miniconverters, as well as Io XT and TTAP Thunderbolt edit interfaces connected to a Mac edit system running Apple Final Cut Pro and Avid software. AJA gear was an affordable and reliable choice for the truck from the start. We’d used it in some demanding situations in the past, and the performance was always spectacular.

We’re particularly pleased with the FS2 frame syncs, as they offer dual-channel conversion capabilities and built-in fiber I/O. Also, they’re compact and lightweight, something you look for when constructing a mobile production truck—the lighter the truck, the better the gas mileage, and the money saved on fuel adds up to savings for our clients. The FS2s also handle embedded audio and include all of the other inputs and outputs you could need, which gives us the flexibility to adapt to each client’s environment.

Over time, we’ve seen more and more fiberoptic connectivity being used in remote productions. This is not just in the camera path, but also fiber that’s used to connect with pre-wired facilities and other trucks that are on-site. Having two affordable and compact frame synchronizers with fiber connectivity in 1RU at half the cost of other similar standalone fiber solutions is really a big bonus for us.

NO CLOSED-CAPTIONING WORRIES
In addition, we’ve found that the FS2 frame syncs work great with closed-captioning, which will be an important consideration for our clients as the 21st Century Communications Act is enforced. The frame syncs are powerful and easy to use, and their quality is outstanding. We’ve also observed that our freelancers are familiar with the units, as they’re becoming the de facto standard in mobile production trucks.

Our experience during the past five years of production work has been that if AJA makes a product for a specific application, we will use that product over anything else out there. We’ve found that the company not only has outstanding service and tech support both before and after the sale, but their products just keep on working. The FS2 frame synchronizers not only save us significant space and money, but they will allow us to work more efficiently.

David is an Emmy-award winning editor, director, video engineer and business owner with more than 31 years of broadcast and post production experience. He may be contacted atdavid@kodiakmobile.tv.