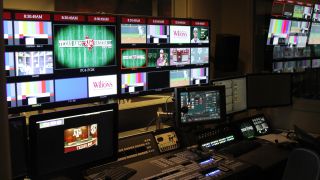 DALLAS—Texas A&M’s 12th Man Productions recently made the transition to IP connectivity with the help of Imagine Communications by installing the Selenio Network Processor.

12th Man Productions is responsible for offering broadcast outputs from any event at Texas A&M’s seven sports venues, as well as providing big-screen entertainment and information. In 2014, a central studio was planned to connect all of the venues back to Kyle Field, the university’s football stadium.

The installation of the Selenio Network Processor provided IP connectivity between every field, the studios, the central technical facilities and the control rooms, according to Imagine. A single SNP unit can support up to eight channels of UHD, 32 channels of HD or a combination of the two, configured as SDI to IP, IP to SDI or IP to IP. Each FPGA-based SNP has four independent processing paths in a single 1RU frame.

“What this project has done is to network every device at every location,” said Zack Bacon, chief broadcast engineer of 12th Man Productions. “It means that instead of a fiber carrying just a single SDI feed, it carries multiple bidirectional signals—as many as 32 uncompressed HD feeds. Capacity between venues is no longer an issue, giving us much better utilization of the fiber capacity and allowing us to do much, much more. And because it is IP, should there be an equipment failure, then the network will simply work around it.”

Texas A&M completed the installation back at the start of the spring semester.