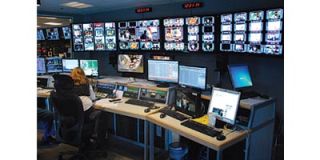 LOS ANGELES—KCET recently had the rare opportunity of building a broadcast and media facility from scratch, as part of our relocation from a facility that had served us for four decades. The new infrastructure is based on an XDCAM file-based workflow, with Harris signal processing and networking gear cementing things together.

The Harris gear resides in the central equipment room, yet touches every corner of the plant. The package includes a Platinum router with integrated HView SX Hybrid multiviewers, along with X85 and X50 units for frame synchronization, signal conversion and other tasks, as well as 6800+ core processing gear.

The Harris Selenio media convergence platform we installed was perhaps the most interesting technology choice, as it provides a compact and bandwidth-efficient system for over-the-air signal encoding.

KEEPING A LOW PROFILE
The Selenio package fits comfortably in 3RU and handles the required 1080i-to- 720p cross-conversion within its frame. (Our HD programming reaches Selenio in 1080i, yet we broadcast in 720p to take advantage of additional subchannels.) This internal conversion removes an additional box and expense.

Selenio also provides statistical multiplexing for efficient bandwidth management. The HD signal, compressed in MPEG- 2, varies between 10 and 12 Mbps, with SD channels encoded at approximately 2.5 Mbps, including audio. The bandwidthefficiency improvements of the SD conversions have been especially noticeable, with viewers offering specific feedback on signal quality.

Selenio also encodes the direct- to-satellite and cable feeds for fiber delivery. This includes Link TV, originated from the KCET facility and delivered to DirecTV and the Dish Network in MPEG-4. Selenio’s ability to handle both MPEG-2 and MPEG-4 within the same frame is another key benefit of the system.

QUICK CHANGE ARTIST
The setup was also simplified with Selenio. While Harris took care of things initially, recent updates, including the MPEG- 4 license, were implemented in-house with ease. NetVX required that the user manually implement and apply changes. With Selenio, updates are automatically applied. I’ll admit that this was initially a bit unnerving, but we’ve become comfortable with the process and it is clearly a time-saver.

Elsewhere, the X85 and X50 converters bring value through multitasking. Both products provide color correction in addition to up, down, and aspect ratio conversion, especially important for the insertion of remote feeds into live newscasts.

We’ve found that the X50 is ideal for straightforward color correction and frame synchronization, and we also use the X85 for the audio processing and AFD code insertion that’s required when downconverting HD signals for cable.

We are a firm believer in one-stop shopping, and the complete infrastructure offered by Harris has allowed us to accomplish this. Routing, encoding, processing and conversion operations all talk to each other via the same network, and we can control and monitor all components using Harris Nucleus panels. The comfort and convenience of working with a single vendor is really hard to beat.

Gordon Bell is senior vice president of, engineering, operations, and IT at KCET. He may be contacted atgbell@kcet.org.