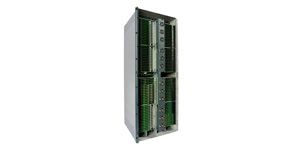 CHESAPEAKE, VA.—Harris Broadcast has announced a new routing product—the Platinum IP3—that the company says is first to be able to scale to very large signal source/destination environments without ancillary distribution and cabling. The switcher is being offered in configurations exceeding 2048 x 2048, and Kerry Wheeles, Harris Broadcast’s director of product marketing, says it’s designed to grow bigger as system requirements expand.

When asked about equally large-scale routing systems that other companies offer, Wheeles seemed a bit skeptical.

The Harris Platinum IP3 router “I don’t know of anybody doing this,” he said. “I do know of one company that claims they can do it, but anyone can put distribution amplifiers and combiners in front of their matrices, if their control system could handle a system this large. You really have to design a control system from scratch if you’re going to do routing on this scale. The control system is one of the most important parts of the router. Our control system ties together all of the elements included in the router—switching, encoding, proc amping—and we believe that this architecture will give our customers a significant advantage as they move forward in their routing requirements.”

The new routing system also features what Harris calls “triple-path” signal routing. As explained by Wheeles, this is an outgrowth of the “dual-path” architecture incorporated in previous Harris Broadcast Platinum routers which gave users the sort of flexibility in handling embedded audio sources that they previously experienced with discrete video and audio switching matrices. Wheeles explained that the new IP3 design built upon this existing Platinum functionality to accommodate data signals too.

“Anyone could do this by adding cards and wraparounds; we are the first to do this in an integrated fashion,” said Wheeles. “Our competitors can accomplish this by taking away video paths; however, we are able do this without affecting any of the video I/Os.”

Expanding an existing plant router can often be a traumatic experience as a shutdown of the entire system usually has to happen to allow additional cabling and distribution to expansion matrices. At minimum, this procedure has always involved temporary loss of certain feeds or groups of feeds and can be very nerve-racking. Wheeles explained that Harris was well aware of the angst that accompanies the typical expansion.

“Ordinarily, to expand routing capability by the addition of an additional matrix, or matrices, inputs to the first frame have to be disconnected and redirected to distribution amplifiers to provide splits to both the old and new router frames,” said Wheeles. “Our new system includes an expansion output card that goes in the frame to provide the capability to expand. With this built-in distribution, all signals are available on one multicore cable that can feed other frames in the future.”

Wheeles also noted that the new Platinum IP3 design also incorporates all of the functionality that has characterized previous Platinum router designs, including integrated multiviewer and frame sync functionality, the ability to automatically accommodate embedded or discrete A/V signals without the need for external synchronizers, breakout/conversion gear or operator intervention, the ability to work with signals traveling on either copper or fiber cables, and the ability to handle 1080p, 4K and high-resolution graphics.