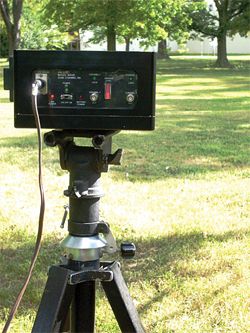 The HXI GigaLink HD
From the seventh-floor window, I could see the presidential candidate motorcade approaching. Years of training would finally be put to the test. Would the range be too great? Had I selected the right equipment?

As I sat perched in the deserted alumni suite overlooking the Murray State Racer football stadium, the motorcade slowly and uneventfully passed by and the broadcast video was as clear as a bell.

I had done it—the four-hop microwave shot had worked.

Now as overly-dramatic as I made that sound, "bouncing" video around for news can be very stressful. If you're in a hostile military/combat environment, someone's life could actually depend on a microwave radio link.

With the nationwide BAS relocation, most broadcasters have upgraded versions of the old reliable (mostly) 2 GHz microwave systems. Many of those are HD-compatible. For 3 Gbps applications, however, the list gets really short. HXI, a microwave equipment manufacturer in Haverhill, Mass. has developed a very robust, dual HD-SDI link that operates in the unlicensed 60 GHz band. Although the link distance is somewhat limited, for certain tasks the GigaLink may be just the tool you've been looking for.

Output power is rated at +10 dBm (10 mW), with a service range stated as up to 500 meters. The units' built-in antennas have a gain of +35 dBi and a beamwidth of five degrees. Modulation is accomplished via direct detection using NRZ (non-return zero) and the BER is less than 1 x 10-12. The transmitter and receiver accommodate dual-link (3 Gbps or 3DTV) via two BNC connectors. Link latency is specified at less than two microseconds. Supported video formats include both SMPTE 292 and 372M. Both units are equipped with both a line power and a battery power indicating red LEDs, with a slide power switch to select the desired source. In addition, there's a green LED to indicate "power on". Both units also include a green signal "lock" LED for each video channel. Unique to the receiver is the "receive level" bar graph LED meter (RSSI).

Upon opening the GigaLink's shipping container, it became clear that this test session was not going to require a lot of "build out." The units were well labeled and I recognized all of the buttons and connections.

The first thing was to mount the units on a solid, yet portable, platform. A quick trip to the station's garage did the trick—I found two old tripods that were made back when you could buy a soda for a dime, and after a bit of effort, I had the HXI units mounted solidly on their perch. For a power source, a quick raid of the photographic equipment storage room yielded a couple of old Panasonic 12 Volt power supplies. The only thing missing was a proper signal to transmit. I assembled the units in my office, and for my first test, I just pointed the transmitter out the window, trying to hit a "no parking" sign that was about 40 yards away. As I've worked with RF for decades, I didn't just want to point the units at each other while they were only inches apart. To aim my shot, I sighted down the side of the unit near a top corner. Using that same technique for aiming the receiver yielded three bars on the receive level indicator (full scale is 10 bars).

(I'll have to say that finding the "front" of each unit was fairly easy, but the built-in antenna assemblies look more like lenses than antennas. I guess that is what happens when you get that close to infrared.)

For my next test, I decided to take the units outdoors. Just behind the TV station here, there's a large wooded yard. I set the transmitter up on a patio that's just outside our tech operation, connected both power and signal (single HD-SDI), and then aimed the unit at a bush on our property line, which was the most distant point available at some 90 yards away. I then transported the receiver to the proximity of the bush, powering it with a car "booster" battery pack with a 4-pin XLR adaptor. After applying power and aiming the receiver, I was rewarded with three bars on the receive level meter. A bit of panning and tilting yielded a signal strength of four bars. I had a buddy manipulate the transmitter and soon we were able to reach five bars. I should note that the temperature that day was 95 degrees, and humidity was around 65 percent (very sticky.)

Not knowing exactly how much signal strength each bar indicated, it seemed like a good idea to do a little experimentation. According to HXI tech staff, if you have a single bar on the graph meter, you have a solid signal. I was anxious to find out, so I placed both the receiver and transmitter units facing each other on a workbench. To simulate path attenuation, I soaked a cotton hand towel with water and folded it into six layers. I placed that towel over the transmitting antenna and powered up the units, complete with SMPTE 292 signal. With all six layers of wet towel, there was no signal registering on the receiver's receive level meter, and there was no green LED "lock" indication. When I "peeled" back one layer of wet cloth, the green "lock" LED lighted, however, the receive level bar graph showed no bars. Although the "lock" was indicated, there was no useable signal present at the output. Peeling back another layer (leaving four) yielded a single bar on the receive level bar graph. At that time, a useable signal was present at the output of the receiver. The signal was pristine, and there was no interruption whatsoever. For monitoring, I was using NBC HD through a Concerto router, to feed an Evertz 2430 DAC HD and Optiquest Q71 PC monitor. This test validated the claim by HXI that if you have a bar, you have a signal. I didn't remove any more layers of wet cloth, as my curiosities had been satisfied. I did however, run two SMPTE 292 signals through the unit simultaneously and the performance was unchanged.

As I didn't use the system at distances greater than about 90 yards, I can't truthfully say what the actual range is. However, after testing the unit for a few days and conferring with the technical staff at HXI, I'm confident that the company's claimed 500 meter range is likely accurate, depending on the atmospheric conditions. The staff at HXI knows RF, and they know it well.

While some may question the need for a microwave link that has a range of only 500 meters, I have no doubt that there are dozens of applications for a high-bandwidth product such as the HXI GigaLink. The unit is built very solidly; be careful not to drop it on your foot. And the nice thing is that it doesn't require a license to operate.

Signal availability is listed as 99.999 percent in the 59-64 GHz region, and the GigaLink is a very smoothly operating system. It's simple, and I noticed that the signal strength didn't vary once the path was established. I became confident to the point that even if I had only one "bar" of signal strength, I was comfortable that I was going to maintain the shot.