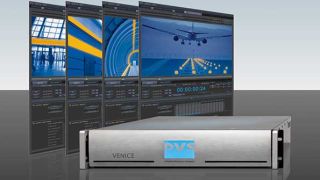 The further development of VENICE expands on video server functions such as HD-SDI ingest and studio playout to include intelligent file-based functions such as file ingest, transcoding, transwrapping, distribution, contribution and media transfer.

VENICE serves as the central Media Production Hub, and integrates seamlessly into any studio broadcast environment. Another new feature integrated into VENICE is the open, web service controlled FIMS (Framework for Interoperable Media Services), a joint AMWA/EBU project. The integration of FIMS into the DVS Media Production Hub controls the recording, transforming and transfer of video files, making studio workflows even more efficient thanks to an increased level of automation such as through scheduled recording.