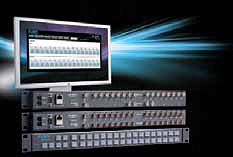 As Sweden’s largest postproduction and visual effects facility, The Chimney Pot provides post-production services to nearly 1,000 commercials and about 15 feature films annually. We have 30 employees working on projects who need to transform stacks of HDCAM and SR tapes to Apple ProRes every day. Fast turnaround is critical, yet we continually found ourselves with a huge queue at our logging stations.

To solve this problem, we brought in AJA’s Ki Pro Mini portable flash disk recorder. We had heard about it, and our reseller, Protel, brought one in for us to test.

While I think it’s typically used for capture or playback, our idea was to put Ki Pro Mini in a rack in our machine room and use it as a VTR. So we switched it in with a router and it works exactly as we’d hoped – it’s a fast and easy solution for ProRes 422 logging. We just put in a tape and walk away, and we get high quality QuickTime files with proper timecode.

The Ki Pro Mini records native ProRes 422 QuickTime files onto one of two flash cards in its slots (one active and one standby). We use an eSata CF card reader, which can download 100GB in just a few minutes.

In addition to a front panel control, the Ki Pro Mini also has a web browser interface, which we use almost exclusively. We have it connected to the Internet and use it as a remote device, which makes it very simple to calibrate settings from the computer. For about three months now, Ki Pro Mini has been in daily use here, and was part of the workflow on a broad range of projects.

All in all, the Ki Pro Mini is a brilliant product that packs a hell of a punch for the money. We can even see its role extending into high quality duplication in the future. I could transfer a TV show to SR tape, take six 5.1 audio tracks and two stereo tracks, transcode ProRes 422 into the card, reverse that, play back to SR tape and make duplicates. We are definitely exploring other ways to put the Ki Pro Mini to work.

Hans Crispin is Technical Engineer and Machine Room Manager at the Chimney Pot in Stockholm. Over the course of his nearly three decadeslong career, he has been involved in the production of hundreds of TV shows, commercials and feature films.