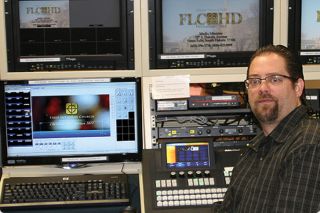 SOUIX FALLS, S.D.—The First Lutheran Church Media Ministry has produced weekly broadcasts of its church services for almost 28 years. There’s a live radio broadcast of our 8:15 a.m. service, and we also do a delayed television broadcast of a later service via our local ABC TV affiliate.

David Palmer We had wanted to upgrade to HD operations for some time, as our old standard-definition gear was beginning to show its age. Actually, things had reached the point where the only parts support we could find for our cameras was via eBay. Eventually it reached the point where the cameras had to be retired. We then initiated our upgrade program with the purchase of some prosumer grade SD/HD cameras. However, this resolved only some of our problems as our legacy production switcher was beginning to fail too and we saw the handwriting on the wall.

In my search for a new HD production switcher, I found that some of the more popular switchers seemed too industrial for our particular needs. Several had limited frame sync capability, thus requiring us to have to provide fully synchronous sources. Also, most of switchers that we evaluated provided menu functions on four-line LED displays and I wanted a unit that could provide operators with a little more information than that.

My search ended when a local reseller recommended the Datavideo SE-3000. It had the touchscreen display that I wanted, along with a lot more bang for the buck than most other switchers that I’d evaluated. As part of the planned upgrade, I was also looking for character generator software. Datavideo had that too with their CG-300 package.

NO-COMPLICATIONS TRANSITION
We purchased and installed the SE-3000 and CG-300, completing our HD upgrade in a fairly short time. We had originally anticipated that the rebuild would result in a two-week outage. However, things went quite smoothly and the transition went much more rapidly than expected, making it possible to continue our worship service broadcasts without any interruptions.

As an added bonus, the frame synchronizers on each of the switcher’s inputs have eliminated the requirement for any reference timing, thus making our system setup less complex and less expensive. The SE-3000 is nicely meeting all of our production needs, not only by being affordable, but by allowing us to switch SD/HD sources simultaneously, integrate professional titling, and maintain our established production standards without any compromises.

David Palmer has served as the senior broadcast technical director at the Sioux Falls First Lutheran Church since 1988. He may be contacted at david.palmer@lodgenet.com.

For additional information, contact Datavideo at 562-696-2324 or visit www.datavideo.us.