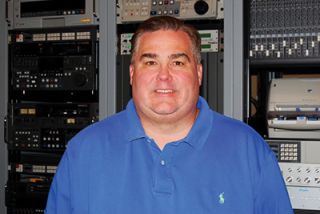 BROKEN ARROW, OKLA.—Kodiak Mobile Television is a new mobile production company and a sister to Kodiak Production Group, a full-service production company that handles both live and post production work. We’ve learned from experience that with the industry-wide move to HD, many of today’s trucks are really overkill for some clients. My business partner, Paul Bronsteader, and I saw a need for a smaller-scale OB truck to serve clients that don’t need or can’t afford the larger ones, and decided to design and build our own.

UNIVERSAL AGREEMENT
Before we started construction, we talked to existing and potential customers about what they’d like to see in an OB truck. The single most requested piece of equipment was a Calrec console, so when it came to audio, the choice was clear—we ordered a Calrec Omega.

Our 160-channel console has 40 dual layer faders and a 5.1 spill fader panel. The configuration includes 64 AES inputs and outputs, 64 analog inputs, 32 analog outputs, and 256 channels of MADI in and out. In our workflow, we send 128 channels via MADI between the Omega console and our routing switcher, with the router handling the task of embedding audio feeds into the video signals that we send to our ISO recorders. We reserve 64 of our MADI input and output channels on the Omega to interface with other mobile units or facilities we might be working with on-site via connections in our I/O panel.

The Omega’s multichannel I/O capability provides great flexibility. We can send dozens of different mixes that can be isolated for separate live feeds, or recorded and sent to postproduction. The ability to create so many mixes from a single console makes the Omega a really powerful system.

AUDIO LOUDNESS MONITOR
One of the Omega features that we find most valuable is the integration of RTW’s TM7 TouchMonitor surround sound analyzer and loudness monitor. The 5.1 analyzer is a tremendous asset, and having this capability right at the console allows us to monitor and make adjustments at the truck, rather than having to deal with it further down the transmission path or in post production.

Another critical feature for us is the ability to expand the console to use Calrec’s powerful Hydra networking technology. This allows us to interface with other Hydra networks when we’re on location and audio signals are being distributed from larger trucks. Being able to connect with those larger trucks via Hydra or MADI makes us very flexible and opens up opportunities to serve as a second or third truck in side-by-side scenarios for large productions.

Mobile production is the most brutal production environment in television, and Calrec consoles easily and reliably stand up to the demands. Calrec has become the de facto standard in the HD OB industry, and as such, it’s easy to find operators who know how to use them. That means that freelance operators require little to no user training, which saves everyone time and money. Having Calrec equipment in our truck bodes well for our company. Customers have asked for a Calrec, and we can now give them that capability.

David Kearnes is co-owner of Kodiak Mobile Television and Kodiak Production Group. He has been in the industry since 1981. He may be contacted atdavid@kodiakmobile.tv.