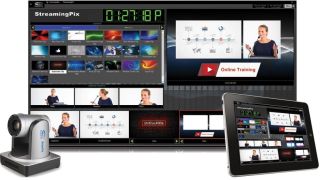 StreamingPix features many of Broadcast Pix’s known acquisition, production, automation and streaming tools in a single package. These include a RoboPix PTZ camera with integrated remote control; a LAV mic; SDI, HDMI, IP and NDI inputs; a library of clips and graphics; media aware macros; and one-to-many streaming capabilities. All of this is controlled through a configurable software interface.

The StreamingPix offering is particularly aimed at production teams at churches, corporations, schools, universities and more for easy-to-use, broadcast-quality production, per Broadcast Pix.

StreamingPix is expected to begin shipping in late April. It is available for $6,495.