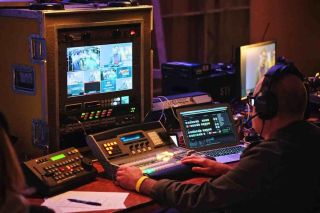 The Blackmagic Design HyperDeck recording setup being used by John Mortensen to produce coverage of the Magic: The Gathering Pro Tour event.

SEATTLE–The broadcast industry, just like many other industries nowadays, is experiencing an upward trend in the use of freelance workers and independent contractors. And being an independent producer and director allows me to work on projects that I find very exciting.

One of the projects I’ve been involved with since the start of my freelance career is Magic: The Gathering Pro Tour. This event is broadcast and streamed live. Every year, the Pro Tour attracts the top players of Magic: The Gathering from all around the world, and awards cash prizes to the winners.

I’m the producer and technical director of this event and manage a live broadcast from each competition.

In order to capture all the action during the competition, I rely on a couple of Blackmagic Design’s HyperDeck Studio SSD video recorders. One of these is set up in an equipment rack along with a Blackmagic Design ATEM 2 M/E production switcher in our gameplay studio for playback. A second unit is used with an ATEM 1 M/E switcher in our analysis studio for slow-motion playback. This HyperDeck recorder is remotely controlled with a Sony DFS-300 control surface to provide slow-motion tracking. While I won’t say this is a “true” slow-motion solution, it does what I want it to do. The variable speed playback provided and the ability to mark cue points has proven to be very useful in depicting the action. Each of the HyperDeck recorders is fed from an auxiliary bus switcher, so I have the ability to change inputs at will. Once a match is over, I use the footage captured on the HyperDeck to work with the winning player in marking cue points at critical events occurring during the game. The winning player then moves to the analysis studio and reviews key strategies with game experts and commentators while I feed an aux bus to an image magnification screen behind them, skipping between cue points and using slow motion to illustrate their arguments.

The resulting main video feed is distributed to monitors in the arena and another feed is streamed to the Web, allowing us to distribute the show to hundreds of thousands of viewers around the world via the Livestream encoding app and Twitch.tv.

We also use footage from two Blackmagic Design H.264 Pro recorders to provide shorter video segments that are uploaded to YouTube throughout the event.

NOT JUST FOR SPORTS

The great flexibility afforded by this setup has allowed me to adapt it to a wide variety of events. The ability to switch between HDMI and SDI inputs with the HyperDeck has also proven very useful in connection with many different live events, corporate events and sporting competitions that I’ve produced.

John Mortensen is an independent producer and director in the Seattle area. He may be contacted at mort@thinkatron.com. For additional information, contact Blackmagic Design at 408-954-0500 or visit www.blackmagicdesign