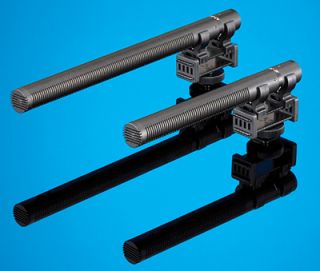 BALTIMORE -- You really don’t see a lot of Azden mics used in broadcast ENG, but Azden has been making electronic devices as Nihonatsu Denki Co., Ltd. since 1952. They won an award for piezoelectric elements in 1969, the same year that they received a Utility Models Rights (similar to a patent) for condenser microphones. They opened a domestic office in Chicago in 1983, quickly moved to New York and changed the name of the company to IWATE Azden a year later. In 1989, they began volume production of headphones and microphones, appearing at the NAB Show for the first time in 1995. The company established a pro audio department in 2001. While formerly niched more for the prosumer, Azden has now set its sights on the crowded pro market.

Sensitivity is set at –33 dB, 1 V/PA. Impedance is 1,200 ohms at 1 kHz. Max SPL is 120 dB and the signal-to-noise ratio is 78 dB. The mics come in large, lined plastic cases, and are equipped with foam wind screens, shock mounts and individual frequency response graphs. The curves supplied were somewhat similar for the long and short versions, and indicated that the mics are good down to 50 Hz, and are down by 10 dB at 30 Hz. The response of the shorter SGM-3416 remains relatively flat before taking a 4 dB rise, starting at 4 kHz and peaking at 6 kH. Response then drops down to unity by 7 kHz, then there’s a slight rise of several dB at 10 kHz, with an eventual roll off at 15 kHz.

The microphones’ shock mount features a screw-down camera shoe mount. It’s an interesting bit of kit and does the job well. When camera-mounted, the shorter SGM- 3416 may be very handy for shooters who have problems keeping the microphone out of the shot when they go wide. And unlike some of the other condenser mics, the Azdens do not use an RF voltage on the diaphragm, allowing the MKH416 to be used in high humidity situations.

IN USE
I attached the mount to my camera, slid the mic in and went for a handheld walk with no problems.

Both Azden mics have about the same handling noise as the Sennheiser MKH 416 that I used as a reference. And the Azden mics do sound somewhat similar to the MKH 416; however, the MKH 416 is about 6 dB more sensitive and has less self noise when preamp levels are set to equalize the sensitivity differences. On the mean streets, this really doesn’t make much difference, but if you’re trying to nab that bluejay who’s squawking from a distance, or to capture some quietly-spoken dialog in a quiet space, you’ll hear the hiss in headphones.

The patterns of both Azden mics are slightly wider than those of the MKH 416, and this may appeal to those who need to mic that two-shot. The frequency response of the Azden mics has the same sort of high-frequency aggressiveness as the MKH 416. The Azdens are also a little thicker around 80-125 Hz, accentuating chest tones and making for a nice voiceover mic.

When I peeked under the hood, the only thing that gave me concern was what looks like a wire with a very small clip that looks to be a ground wire from the internal circuitry to the die-cast body. The clip is very small and is wrapped by several layers of protective tape. My concern is that at some future point, especially in highly humid environments, that connection will be compromised. I would like to see a soldered or mechanical connection there. If a problem does occur, all you need to do is unscrew the three small screws at the base of the mic, slide the innards out, unwrap the tape and clean the connection between the clip and the body.

SUMMARY
These two microphones are considerably less expensive than some of the other popular shotgun models used in ENG and EFP. Users may want to try them first in situations that may be hazardous to their more expensive shotgun mics.

Ty Ford has been reviewing pro audio gear for more than 20 years. He may be contacted atwww.tyford.com.