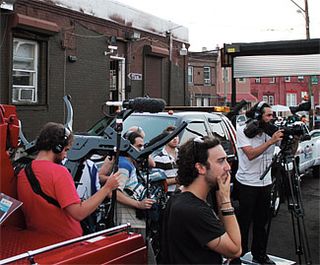 B.J. Levin (foreground) oversees production of “Wreck Chasers” episode.
NEW YORK
I've been involved as a director, show runner and executive producer of reality television programs for six years. Some of the most recent programs I've been involved with probably would have been nearly impossible without some of the more recent advances in technology for digital acquisition.

I'm currently producing six episodes of "Wreck Chasers," a new reality series for TLC. The show follows Philadelphia tow truck drivers in their aggressive efforts to be first on the scene when a car accident takes place. To get the series green-lit, we shot two pilot episodes, capturing much of the footage from the back seat of a fast moving double-cab tow truck.

We mimicked a workflow that had been proven and perfected on a series called "Repossessed!" that I produced last year for the National Geographic Channel. Our production challenge for both shows involved working out a way to capture and monitor footage from the inside of a fast moving vehicle, absorbing bumps, rough weather conditions and high speed chases along the way. For "Wreck Chasers" we installed Toshiba lipstick cameras in the cab of a tow truck connected to monitors and AJA Ki Pros with SSD drives. The AJAs provided four hours of uninterrupted capture.

The setup was simple, and with the Ki Pros, we were able to move our crew—which consisted of myself, a sound person and cameraman—with our gear from one truck to another very quickly (a requirement for a fast moving series of this nature).

We followed five tow trucks over the course of this series, and having the mobility to quickly move from one to another was very essential. On a show such as this, we're operating as a documentary crew, following our subjects very quickly, and through sensitive situations. We needed gear that was going to be flexible, nimble and 100 percent reliable.

From my experience with Ki Pro in connection with my previous show, I knew that the SSD drives could withstand the beating they would be taking in the back of the tow truck. I also benefited from the ability to capture for much longer periods of time, and to have immediate access to ProRes HQ files when we went into edit sessions. In the past I would capture on DVCPRO HD tapes, and have to halt production every 33 minutes for tape changes. This sort of thing really breaks the flow of action and would have prevented us from capturing some of the great unpredictable moments in the new series. Ki Pro provides four hours of continuous recording, which is essential for this type of fast-paced production.

We cut this show on Avid and my previous series was done with Final Cut Pro. The advantage of Ki Pro is that you are able to bring material right into your editing pipeline without going through the extra step of digitization—another huge time saving bonus especially when working on series like ours where six episodes were produced end-to-end in just under four months.

B.J. Levin is co-executive producer and showrunner on "Wreck Chasers." He may be contacted at1000wordspictures@gmail.com.