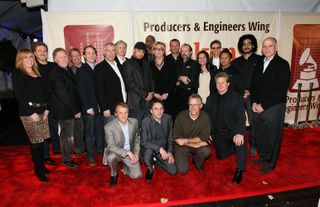 Maureen Droney, P&E Wing Senior Executive Director, noted, "The evening was a huge success, and once again we must offer a sincere thank you to all of our sponsors. We couldn't have done it without them. Since we are currently celebrating the P&E Wing’s 10th anniversary, this year's event was particularly meaningful, and it is especially gratifying that so many leading high quality brands partnered with us to make the night happen. We all look forward to next year."

Personnel from several of the sponsors also weighed in on the evening's festivities:

Mark Brunner, Sr. Director, Global Brand Management, Shure, stated, "The Producers & Engineers Wing's annual event at The Village is consistently the definitive gathering of the country's top music production personnel and audio industry manufacturers, providing a great ramp up during the excitement of GRAMMY week with an emphasis on the people who make it happen technically. This year's honoring of T Bone Burnett symbolized and reinforced the commitment to production quality that lives daily in the hearts and minds of the event's attendees."

Michael MacDonald, VP, Sales & Marketing, Harman Professional Division, stated, "No industry event brings more recording industry heavy hitters into one place than the P&E Wing's GRAMMY Week Event. It is really a pleasure to support the P&E Wing as well as to meet and greet the folks who produce, record and mix today's music."