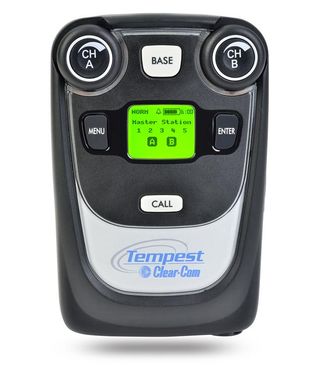 “It is indeed an honor for Clear-Com to be recognized for its contributions to the professional broadcast industry,” says Bob Boster, president, Clear-Com. “Clear-Com is committed to continuous development of high-end products for all its sectors. By presenting the Tempest MasterBelt with its prestigious STAR Award, TV Technology Europe recognizes the originality and value of such a product, and reinforces the fact that it improves the way broadcasters work.”

TV Technology Europe’s editor reviewed a variety of products, examined the technical applications and their overall contribution to the industry before selecting an exclusive set of winners. “STAR Awards are given to interesting new products that help a user save money or accomplish a task in an easier way,” says Mark Hallinger, editor of TV Technology Europe. “The products selected help advance the industry. Some were chosen because of technical novelty or innovation, some because they filled an important gap in the production or transmission chain, and some because they were just cool products.”

Ideal for mobile productions, especially news production, the compact and portable Tempest2400 MasterBelt enables moving production team members to conveniently travel to multiple locations and stay in communication with one another without losing connection. Since the MasterBelt has most of the advanced features, reliability and robustness of the original Tempest2400 rack-mount BaseStation, it eliminates the need for crew members to carry around and put in an intercom base station at every new broadcast site, significantly reducing downtime.

The MasterBelt also gives broadcast production teams an edge by enabling them to rapidly perform pre-setup responsibilities. When production teams arrive at a designated location to broadcast an event, they need to prepare their equipment and intercom base stations for use. Because it offers full-duplex capability, can be quickly activated and requires minimal effort to operate, the MasterBelt along with the other Tempest BeltStations can be immediately utilized in the hectic environment to carefully coordinate the installation of all the other technologies and communication systems. Thus, the MasterBelt is a strategic tool for helping broadcast production teams set up faster, easier, and safer.

A single MasterBelt can be paired with any standard Tempest2400 CP-222 two-channel BeltStation to create a full-featured two-channel system operating in 80MHz of spectrum in the 2.4-GHz band. This enables users to coordinate and communicate hands-free. The MasterBelt itself also functions as a BeltStation, allowing communications between up to six full-duplex wireless users, and includes a rechargeable lithium-ion polymer battery capable of up to eight hours of operation. It can also be powered by three standard AA alkaline batteries as a backup, providing four additional hours of operations. As with all Tempest wireless systems, it does not interfere with traditional wireless microphone, IFB or in-ear monitor systems that operate in the UHF band.

Clear-Com, an HME company, is a global provider in professional voice communications systems since 1968. We develop and market proven intercom technologies such as Analog & Digital Partyline, Digital Matrix, Wireless and Intercom-over-IP systems for critical communication applications in broadcast, performance venues, military, government and enterprise markets. Recognized for our legacy of intercom innovations, production teams around the world have come to depend on Clear-Com for clear, reliable and scalable communications solutions. For more information, please visit www.clearcom.com.