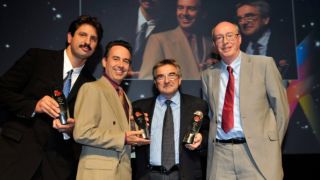 A number of technical awards were given out at this year’s International Broadcast Convention (IBC) show, in a variety of categories, recognizing technical excellence in an array of disciplines.

“Our industry is changing, with new delivery platforms and business models expanding on the foundation of the long history of broadcasting,” said Michael Crimp, IBC’s CEO. “This year, our awards have really reflected these changes, taking us right into the home with new ways of discovering and enjoying the finest content.“

The IBC cited the STRL’s work in several major technological advances involving television since the lab’s founding in 1930. Those include research in color and high-definition television, satellite broadcasting, and plasma video displays.

The IBC Innovation Award for Content Creation was awarded for a screen application called “The Walking Dead” from FX UK. Developed by Red Bee Media, the application is used for audio watermarking from Civolution for synchronization with live content.

The award for Content Management was given to NASCAR. The IBC cited Telestream, working in association with Promise Technology and Quantum, which developed a compact system for multiple replays.

The award for Content Delivery went to 4oD, the video-on-demand service from Channel 4 in the United Kingdom. The company worked with KIT digital to develop an application for the Kinect controller on the Xbox that allows the viewer to use voice and gesture control to explore and select content.

The IBC’s “Judges’ Prize” was given to FIMS, the Framework for Interoperable Media Services. It’s an effort headed by the Advanced Media Workflow Association (AMWA) and the European Broadcasting Union (EBU).

The Fraunhofer Institute for Telecommunications at the Heinrich Hertz Institute received an IBC award for a technical paper that described work on auto-stereoscopic television or glasses-free 3D. (At IBC, Dolby showed a prototype 50in auto stereoscopic 3D television — developed in cooperation with Philips — in combination with its Dolby Digital Plus surround sound audio decoding, which looked and sounded quite impressive from most angles. Dolby said the glasses-free 3-D technology scales for different screen sizes, with the potential to bring high-quality native 3-D display to a number of display devices.)

Finalists in the various categories included ESPN for graphics technology from Orad Hi-Tech Systems; Hawk-Eye and Spidercam for the enhancement of its coverage of Grand Slam tennis; and TV Globo, in Brazil, for VATE, a new tool for developers and cameramen working on live TV production.

Others included a new asset management system using by Turner Sports to keep track of 6000 events and 2 million highlights a year. The system used technology by Dalet Systems, EVS, Stainless Code, Active Storage, NetApp, Quantum, Azurro Systems Integration, CineSys, Telecom Network Solutions and Enterprise Applications. Also a finalist was Sky News Arabia for a production base in Abu Dhabi that was set up with systems integrator TSL working with such suppliers as ScheduALL, Miranda Technologies, EVS and Broadcast Bionics.

Finally, other finalists included a home networking system developed by DirecTV with technology partners Broadcom, Entropic Communications, Jethead Development, Pace and Samsung; CBS Sports for its use of VidyoCast technology; and ITV in the United Kingdom for its a content replacement system that used splicing from Yospace communicating with a Snell automation system.