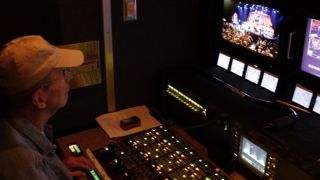 The mobile production company has purchased six monitors: two for each of the company’s three trucks, used both on board and inside venues. The monitors give camera shaders, lighting directors, stage managers and other technical personnel an exact representation of video output quality in advance of live events.

One of the first successful projects included EntreLeadership, a live business and leadership event from financial wellness guru and radio host Dave Ramsey that was simulcast over the web from The People’s Church in Franklin, TN. TNDV president Nic Dugger and his team deployed four monitors to confirm accurate color and contrast ratio measurements of the eventual live feed well before the shoot, ensuring that all involved were confident that the signal on the screen was an accurate representation of the image quality being produced.

TNDV had a monitor available for a producer and lighting director at The People’s Church. It was pertinent that when they looked at images from TNDV’s cameras, they were seeing the same quality as the camera shader sees in the truck. It’s not good enough to get a 32in consumer monitor with an HDMI conversion brick. In a controlled environment with hundreds of moving and conventional lights, the difference in one light color temperature or another light being out of focus can be the difference in how good the shot looks.

One of the main reasons for the exact precision is the true HD-SDI inputs of the monitor, which eliminate conversion requirements. Ultimately, the behavior of OLED monitors like the Sony PVM-1741 includes exceptionally accurate black level, which is what sets it apart from less expensive LCD monitors that are often used in live production.

Not having accurate black levels leads to inaccurate shading, and makes the lighting team push light harder than what is required. The ability to get accurate, real-life black levels to the point where it looks like the monitor is off at zero IRE raises the overall quality. It’s become popular with camera shaders because it makes it easier to detect noise at black levels and make necessary adjustments.