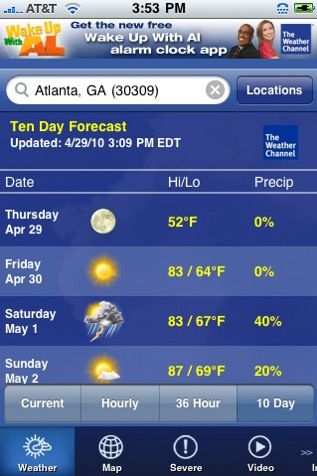 The 100-million milestone is attributed to the company’s continued development efforts, innovations and response to severe weather throughout 2012.

One report last week said the Weather Channel, a privately owned company that does disclose its revenue figures, was close to generating half its income from non-broadcast applications. Comcast’s NBCUniversal and private-equity firms the Blackstone Group and Bain Capital own the Weather Channel.

“This is a huge achievement for us — only a very small, select number of companies can say they have this reach and consumer loyalty — and I want to thank our users and our employees,” said Cameron Clayton, digital division president, The Weather Company. “Reaching this milestone is a testament not only to our amazing users who continue to seek out — and use — The Weather Channel on their devices, but also to our hard-working team, which continues its efforts to create the best app available on every screen.”

Hurricane Sandy brought record traffic days to The Weather Channel mobile and tablets apps, only to be beaten during the 2012 holidays, when consumers received new devices and experienced a Christmas day with a lot of winter weather.

An increase in downloads was also seen during notable 2012 weather events, such as an unseasonably warm “winter-less” winter, a series of early-onset and continued deadly tornado outbreaks, months of record heat, a historic drought, widespread wildfires, Hurricane Isaac in August and Hurricane Sandy in October.