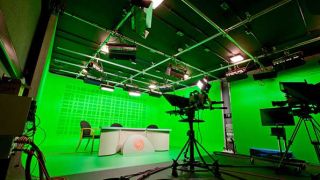 Phoenix CNE broadcasts a mix of political and business information and entertainment programming via satellite transponder Eurobird D9S to 60 countries and regions in Europe. It is carried by many cable and IPTV systems across the footprint.

The turnkey project includes a four-camera news and magazine studio with virtual 3-D set, and a green-screen studio with robotic camera.

The playout system, from PlayBox Technology, has a capacity for six channels. Phoenix CNE can ingest live streams from the mother channel in Hong Kong, direct from the studio, or any material delivered from external sources.

The PlayBox Metus MAM makes the content accessible to all areas of the business; this is particularly useful for scheduling and post-production. Operators can edit metadata, top and tail, make clips, set mark-in and mark-out points and easily store this content to their archive servers.

Editors at three Final Cut Pro edit stations can browse and import content directly into FCP projects using proxy files. When an edit project is complete and ready to be rendered, then the full-resolution material is used. A fourth FCP suite is dedicated to voice-over.

Alongside this Phoenix CNE has the TrafficBox planning and scheduling package that provides management, reporting and billing tools for all the broadcaster's commercial clients. When the schedules are ready, the transmission servers begin to copy any missing files across from the storage locations to their local media storage. PlayBox Multi Backup Manager is used to provide 3+1 playout redundancy.

Routing and timing from Evertz was used throughout the facility, with multi-viewers, signal conversion and distribution from Miranda. The picture monitoring came from JVC, with Tektronix in place for test and measurement.

The operation center launched on the July 2, 2012, with further channels to be launched as Phoenix CNE’s requirements demand.