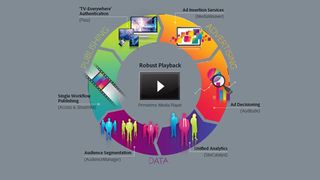 Beginning in 2011, Adobe Systems has continued to methodically build out its Project Primetime platform to meet the increasing demand for high-quality online video consumption across all screens. The company figures now’s the time to prepare for the inevitable “TV Everywhere” onslaught, whereby video will be viewed across the computers and all types of IP-enabled portable devices, as well as on traditional television.

It’s a smart bet. UK market research firm Digital TV Research (November 2012) predicts $28.7 billion in total global online TV and video revenue by 2017, with 480 million households across 40 countries expected to be watching online TV and video by then. Doubling down, Adobe also cites the Digital TV Research report that assumes a 413-percent increase in ad growth for online media through 2017. Separate research from ComScore claims that 3.4 billion minutes of online video was viewed online across more than 50 percent of the U.S. population in September 2012 alone.

These numbers can be backed up with real-world usage data. Adobe said its Primetime was used to authenticate (that is, making sure a viewer is a paid subscriber of a pay-TV service before allowing access) 88 million streams of the 2012 Summer Olympics delivered by NBC Sports in the U.S. This, Adobe said, is a record in TV Everywhere history.

While many companies have developed similar software tools for the space, none has devoted as much resources to solving the various issues involved with the distribution chain that must be addressed in order to successfully publish and monetize broadcast TV content across any Web-connected device. Adobe’s end-to-end ecosystem approach has resulted in a comprehensive strategy that addresses all of the most important aspects of processing and delivering video in a timely and highly secure way.

Adobe has now literally closed the loop with the addition of MediaWeaver, a new ad insertion service that digitally inserts commercial spots into live or on-demand content to maximize revenue; and Primetime Media Player, a technology that allows TV content owners and distributors to maximize audience reach and ensure that all experiences are immediately monetizable through seamless ad insertion and analytics.

Following months of real-world tests (e.g., the summer Olympics), Adobe is now making the full Primetime platform available in beta form — via an SDK for Windows, Mac OS, Android and iOS devices — with a full release planned for early next year. The platform tightly integrates Adobe’s video publishing (Pass, Access and StreamKit), advertising (MediaWeaver and Auditude) and data (AudienceManager and SiteCatalyst) solutions to ensure TV content owners and distributors can generate the most revenue from their content with the broadest audience reach, seamless HD video playback, and fully optimized content and ad delivery across any Web-connected device.

Adobe Pass has been recognized with a Primetime Emmy Engineering Award, relating to its use by CNN and Turner Broadcasting.

Ashley Still, Director of Product Management for Adobe Systems, said the company’s efforts have been focused on delivering a viewing experience that mirrors broadcast TV while also supporting audience targeting and analytics to help content owners monetize their assets in ways they never could before.

“We want to make sure all of this content is monetizable, that there’s a real revenue model behind putting content online because the existing TV industry has a known and very successful business model," Still said. "Content owners and distributors clearly want to make money from this endeavor, so we’re enabling access to a wide variety of content in a highly secure way. That’s the only way they will feel comfortable enough to allow their assets to be seamlessly consumed across all of the display screens we see in the market today.”

Still said broadcasters don't have to deploy the entire Primetime platform in order to get the benefits of one or two of the platform’s modules to fit their infrastructure needs.

“Broadcasters can absolutely add to their existing infrastructure and get the value of just the tools they need at the time, then add on later as necessary,” she said.

The goal, Still said, is to provide dynamically inserted ad experiences that mirror broadcast TV while also offering content owners and distributors the ability to target and capture audience metrics, which can then be leveraged when selling ads.

The new Primetime Media Player is at the core of Primetime and allows TV content owners and distributors to rely on a single workflow for content preparation, rights management and streaming to eliminate platform fragmentation challenges and maximize reach. In addition, the player reduces costs by tightly integrating with all Primetime components, which ensures that content, ads and analytics are optimized and inserted within the player to maximize the value of the content and provide a more meaningful audience experience.

Adobe said the Primetime Media Player for desktop browsers leverages Adobe’s Flash Player and features capabilities such as closed captioning, seamless ad insertion, and advanced analytics. The Primetime Media Player for mobile works within apps today, and will support native browser environments in the future. Consumers do not have to download a separate player for non-desktop devices.