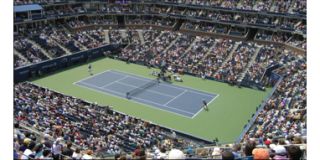 FLUSHING MEADOWS, N.Y.: Preparations are well underway for broadcasters covering this year’s US Open, Aug. 27–Sept. 9. With two full weeks of domestic coverage set to air on CBS and its sports carrier, ESPN2 and Tennis Channel, the crews that are toiling at Billie Jean King National Tennis Center in Flushing Meadows, Corona Park, Queens, are gearing up for their segmented windows. And the addition of a sports network from the host broadcaster is adding a new source of matches for avid tennis fans.

EXPANDED AIR
As the host broadcaster for the United States Tennis Association (USTA), CBS is not only supporting the other domestic broadcasters, but a multitude of foreign entities, for which CBS will supply feeds for the main events from the six courts, as well as the out-of- arena extras.

“What we’re basically adding,” said Ken Aagaard, executive vice president, engineering, operations and production services for CBS Sports, “is CBS Sports Network taking on the qualifiers, which have never been broadcast before. Those matches will be produced on Courts 17 and 11, and the USTA will provide them to any interested countries.”

Also, when host CBS airs its matches, CBS Sports Network, which is available to 99 million pay-TV subscribers in the United States, will air other content from the other courts. “CBS usually airs what’s on at Arthur Ashe Stadium (the center court of the complex), but with [content from] CBS Sports Network,” said Aagaard, “we’ll always be airing varied content.”

He also noted that CBS Sports Network will be sharing a set on the concourse with Tennis Channel from Sept 1-3; and the sports net will also air a one-hour preshow, which is also new this year, that Tennis Channel will broadcast during the week.

TECH SETUP
The basic camera setup will be a reprise from every year, Aagaard said. “The complement will include 18 cameras, on all three main courts, in all of the primary tennis positions,” including from five robocams and aerials from the blimp.

During the CBS broadcast slots on the weekends, the network will employ TechImaging’s SwingVision, featuring camera shots of up to 500 frames per second (CBS shoots from 300 to 500) for high-speed replays, along with specialty graphics from Piero to illustrate where serves land, etc.

As for the mobile units, F&F Productions’ GTX 16 is the key truck for all CBS and ESPN live action; Tennis Channel will employ NEP Supershooters 16 for its coverage; NCP 8B will be a graphics production truck for CBS Sports Network.

For Court 13, Lyon Video MU7 will stay through the first weekend for CBS Sports Network. NEP’s ESU will be the core that “ties all of this technology together,” said Aagaard, including the trucks with the various control rooms, routers, etc.

As for the King Tennis Center, Aagaard likes the setup. “It’s pre-cabled,” he said. “We’ll use fiber with satellite backup to transport the content. Verizon gives us uncompressed fiber signals, and because it’s local and doesn’t have to transmit by a common carrier, they can give us full 1.5 gigabyte bandwidth. That means we’ll get an uncompressed signal back to the CBS Broadcast Center.”

ON ‘THE DEUCE’
ESPN2 is booking many of its facilities through CBS, according to Chris Calcinari, vice president of remote operations for ESPN/ABC Sports. Also known as “The Deuce,” ESPN2 will also employ F&F’s GTX 14 to support its studio activity and interactive TV product, which is multiscreen distribution for DirecTV; and secondly, as the “B” control room.

ESPN2 will use “a pretty hefty infrastructure of EVS decks and Avid editing systems,” Calcinari said. “Bexel is supporting our EVS and editing network, plus our small control room within the compound’s outboard office area. We have the entire second floor.”

One of other possible enhancements for ESPN, which will also have studios in the Fan Zone and for ESPN International, during the broadcast will be “Spidercam,” which will supply a four-point aerial system connected to the lighting standards of the stadium. In addition, ESPN will also have a flying camera system across zone in the south plaza to create a TV visual and enhance the on-site fan experience.

As for the USTA, it has its own US Open world feed production, called USOptimum, which spotlights the English-language broadcast of “the best match of the moment” from the tournament’s six TV courts. It’s transmitted hourly to multiple countries worldwide, said Steve Gorsuch, US Open director of broadcast operations and production.

Gorsuch, noting the synergies created between the USTA, CBS, ESPN, Tennis Channel and what he estimated “as 20 broadcasters” working on the event, pointed out that the King Tennis Center was built with television in mind. “Many of the camera positions were carved out to create great camera angles,” he said. “Everyone wants to be at center court, so we went about a foot below the surface of the court to create the camera pits.”

MINUS ONE DIMENSION
As per usual for a marquee event, preparations began way in advance. “We started in mid-July, setting up 11 mobile units and trucks,” one more than last year, to accommodate CBS Sports Network, said Aagaard, with the crew on site Aug. 18.

And while Gorsuch (who used to work for CBS Sports and has spent a significant part of his summers at the US Open in Flushing Meadows or Forest Hills for 36 years) noted that there will be not be a 3D broadcast for the first time in three years, he and Aagaard want that popular feature back in 2013.

“While we won an Emmy the first year we added 3D to our broadcast in 2010, we couldn’t include it this year due to the loss of a sponsor,” he said, “but we’re hopeful for next year.”

In the end, it’s about a team approach to garner as many tennis-loving eyeballs as possible. “We’re all presenting tennis here and we’re all after the same goal,” Gorsuch said. “We’re family and we’re trying to present the sport as best we can.”