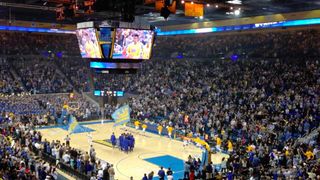 LOS ANGELES—After 30 months of renovations, UCLA’s Pauley Pavilion is once again hosting UCLA men’s and women’s college basketball games in this legendary Los Angeles arena. The top-to-bottom upgrade was designed to improve facilities for patrons and athletes alike, while boosting seating from 12,800 to 13,800 by moving seats closer to the playing floor.

At the same time, UCLA upgraded the pavilion’s master control room and cabled TV camera to HD standards. As part of this modernization, the university added four Panasonic AG-HPX370 cameras to provide live content to the Pauley Pavilion’s center-hung Daktronics HD video display. It is comprised of four 12-foot by 16-foot LED 10mm displays, mounted over a 2-foot by 27-foot LED display ring. (The pavilion also has a 360 degree LED “ribbon board” about 3 feet tall encircling the stadium inside, to carry advertising, messages to fans, and other content.)

“The old control room and SD cameras were 15 years old, and due for replacement,” said Paul Kalil. He is CEO of Van Wagner Big Screen Network Productions (VWBSNP), a Westlake Village, Calif-based company that provides video systems integration and in-stadium production for a number of U.S. colleges, including UCLA. “When UCLA decided to upgrade the Pauley Pavilion, they saw the chance to bring these facilities up to HD broadcast quality, and took it.”

VWBSNP has a lot of experience producing live content for stadium video displays. “In fact, we are the world’s longest-running producer of content for these screens,” said Kalil. “We got our start at Dodgers Stadium about 32 years ago, when they were the first stadium to install outdoor video displays.”

As UCLA’s operating representative, VWBSNW is responsible for shooting and producing the university’s in-stadium basketball games, and feeding game video and other content to the center screens and LED ribbon boards. This is why UCLA enlisted VWBSNW to design the Pauley Pavilion’s new master control room. In response, Kalil and his team chose to equip it with Ross Video equipment, including a Ross Video Carbonite video switcher, Xpression CG and graphics system, and BlackStorm video servers/slo-mo players.

When it came to cameras, VWBSNW opted for the Panasonic AG-HPX370, for use as cabled mobile units. Priced just under $10,000, the shoulder-mountable AG-HPX370 is equipped with a 1/3-inch 2.2-megapixel 3-chip imager, that provides 10-bit, 4:2:2 1920 x 1080 video resolution. The camcorder records to Panasonic P2 memory cards, however, for live coverage, VWBSNW connects the Pauley Pavilion’s four HPX370s to master control via fiber.

UCLA’s Athletics department was one of Panasonic’s earliest P2 customers in the college sports market. “Today, its athletics video department owns and operates a number of our P2 cameras at various feature levels including the AG-HPX370,” said Carter L. Hoskins, Panasonic’s national sales manager for media & entertainment. Due to its ruggedness, lens flexibility, and sub-10,000 price tag, the AG-HPX370 “has become the most popular camcorder within the college sports market,” Hoskins added.

Kalil’s company also owns AG-HPX370s, so choosing this camera for the Pauley Pavilion was not a big stretch. “I like this camera’s toughness, how easy it is to edit using P2 cards—because we also produce after-the-event content as well as live in-stadium video—and the fact that it works with a range of lens, and performs well both in mobile and fixed applications,” he said.

Video producers take note: Producing live content for in-stadium viewing is not the same as producing broadcasts for television and the Web. “Our role is to inform and educate the crowd, and to get them pumped up when necessary,” said Kalil. “We’re on the home team’s side, rather than serving as an objective third-party viewer. We need to get people fired up!”

As a result, being able to move around with cabled AG-HPX370s is vitally important to VWBSNW’s Bruins’ basketball content: They need to keep up with the antics in the stands as well as the action on the floor. So fixed cameras are not enough: Kalil’s video crews need to get up close to the people generating the most buzz, and get there fast.

This explains their need for a lightweight yet HD broadcast-quality camcorder like the AG-HPX370. At a time when fans are accustomed to seeing HD resolution on their home TV screens, nothing less will do on the Bruins’ Daktronics displays. “At the same time, we don’t want to get in the way of the game or detract from it,” Kalil said. “This is why the AG-HPX370’s moderate size comes in handy: It doesn’t overpower the crowd to see one of these units up close.

“Since we started using the AG-HPX370 camcorders at the Pauley Pavilion, they’ve worked pretty much flawlessly,” Kalil concluded. “They are a functional and economical fit for what we need to capture Bruins’ basketball action at its best.”