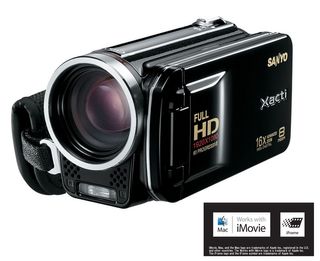 CHATSWORTH, CALIF.: Sanyo jumped out of the gate this week with two camcorders that use Apple’s new iFrame recording format. The Sanyo VPC-HD2000A and the VPC-FH1A record 1080p and 1080i at 60 fps, and iFrame at 960 x 540 at 30 fps, plus they shoot 8 megapixel stills at up to 10x optical zoom--simultaneously with video. Both will do high-speed recording, 240/600 fps, for 1/4 or 1/10 slow-motion playback, and both record to SC/SDHC media cards They feature image stabilizing and “face-chasing” technology.

These two cameras are said to be the first to use Apple’s iFrame format, one that purportedly remains unchanged for editing and renders smaller file sizes than other formats, most likely because of the resolution. Afterdawn.com, a Finnish tech site, describes iFrame thus: “The specs for iFrame don't appear to be a new format so much as a new standard for existing formats. It uses 30fps H.264 (MPEG-4 AVC) video and AAC audio. What makes it unique is the video resolution, which is 960 x 540.” (Afterdawn’s review of iFrame is available here.)