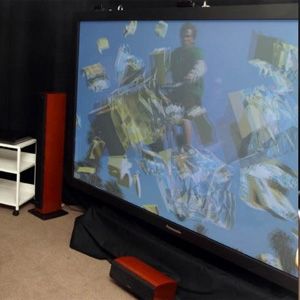 OSAKA: Panasonic is coming out with a 50-inch, hi-def, 3D plasma display, to be ready for the market next year. The company announced the product this week and intends to show it at the CEATEC convention near Tokyo Oct. 6-10. The TV will come with active shutter glasses that evolved out of Panasonic’s first 3D plasma home theater system, rolled out last year. That system included a 103-inch screen (shown at left). Panasonic said it believed the 50-inch would be the most popular size for home theaters.

April 2009: Began development of professional 3D movie production system consisting of a twin-lens P2 camcorder, a 3D video recorder and a PDP that allows for evaluation of 3D video. Conceptual models were presented at NAB 2009.