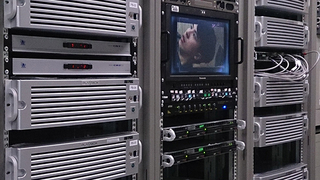 Hong Kong's largest independent broadcaster, Television Broadcasts (TVB), has completed a major upgrade to its playout facilities based on PlayBox Technology systems. The project included the installation of 26 servers at the network's headquarters in TVB City, Kowloon. The installation is for nine HD channels, with seven of them already on-air, and the others are in precommission testing

Twenty of the servers installed for playout are AirBox and TitleBox, with character generation and graphics. Eighteen are configured with 1:1 redundancy level for main and back-up operation on the nine HD channels.

An additional pair of servers has been installed for use in staff training, again as main and backup.

Each channel incorporates a PlayBox SafeBox automated content transfer management tool which replicates remote content to local playout server folders for safe playback. The role of SafeBox is to manage wipe lists coming from the TVB traffic department and to purge the unnecessary content.

The project, which also included on-site customer training, was completed together with the engineering team from Mediatech (International) Ltd, the local PlayBox Technology partner in Hong Kong.