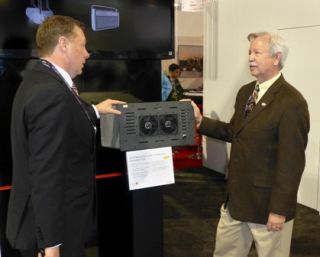 According to some accounts, off-air television is fading fast. However, it seems as if someone forgot to tell the public and the transmitter manufacturers. While megawatt ERPs and big sticks may be replaced by gap-fillers, RF is still alive and well. From exciters to antennas, there was no shortage of new products at this year’s NAB show.

Mike Rosso (L) of Axcera runs through the features of a 6X series liquid-cooled transmitter with Jim Danford of IneoQuest.Axcera traveled to Las Vegas with a sampling of the company’s products, including the 6X series liquid-cooled transmitter that’s designed to operate with digital or analog television standards, including ATSC, DVB-T/T2, DVB-H/SH, CMMB (STiMi), DAB, T-DMB, ISDB-T, ISDB-Tb, NTSC, PAL and others.

Elber SRL was showing the Onedriver and Onecompact lines of low- and medium-power transmitters designed by Onetastic, with power levels between 70 and 340 Watts. Options include on-board GPS, gap filling, Rx SAT, etc. Also showing was the Onetastic-designed OTGPS1U GPS receiver for locking SFNs together.

Jampro Antennas had a strong presence at the NAB Show. The company has acquired Alan Dick Broadcast and was showing their full complement of economical and flexible television solutions, including DTV and DVB-T.

LARCAN USA displayed their new Cool-Dock Series. These are liquid-cooled, solid-state transmitters with outputs ranging from1.5 kW to 50 kW, for both UHF and VHF service. Also showing was the new Mobile Plus Series end-to-end Mobile DTV transmission system, and the MXi Series digital/analog sol-id-state UHF transmitters with power outputs ranging from 5 Watts to 1 kW and higher.

OMB Sistemas Electrónicos arrived in Las Vegas with their latest television transmitter technology, with models for both analog and digital services. The company’s products range from the MOT 1200 FL BIII 1.2 kW analog model, which is constructed with the latest LDMOS technology, all the way to the 6 kW LDMOS MOT 6000 ATSC unit, which features eight independent amplifier units for enhanced reliability.

Teamcast brought along its new MT2 software release for the company’s 2000/3000 modulator products. The MT2 handles both DVB-T and DVB-T2 modulation and features redundant IP inputs, which eliminates a lot of complexity and associated costs.

ANTENNAS/TRANSMISSION LINE
Delta Meccanica SRL arrived in town with their 50 W DVB filter, which features double cross-coupling, and a critical/non-critical mask. Also available for inspection were their 2.5 kW and 5 kW dummy loads.