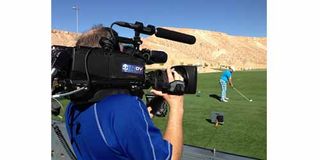 For the program, which debuts December 23 on ESPN, TNDV drove Aspiration, its 40-foot expanding side mobile production truck, to the shoot location in Mesquite, Nev.

“We used a special slo-mo camera to clearly capture dramatic shots and up-close reactions at 1000 frames per second, with instantaneous live replay of super slo-mo footage,” said Nic Dugger, president and owner of TNDV. “This allowed us to capture and analyze the swing technique and style of each golfer in a much more intensive method than what is possible with traditional 30 frame-per-second camera technology.”

Dugger added that the Protracer software, used in combination with an ESPN Innovations robotic camera, provided the graphical representation with a red line that followed each hook, slice and straight ball path. The robotic camera uses a smaller camera head with an ability to move left to right on a dolly track, with independent tilt and pan from remote locations.