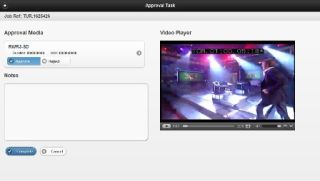 SINGAPORE: TMD, a provider of asset management systems for digital and physical assets, recently introduced i-mediaflex Mobile to its product line, allowing users to access content and metadata from a tablet or smartphone.

i-mediaflex is a web-enabled solution for asset and business process management, for both digital and analog content. A typical workflow for a broadcast playout facility would be to create a set of trailers for a new series. Producers create work orders in i-mediaflex which are then delivered to editors, along with the content they will need to make the trailers.

TMD has now added apps for iPads, Android tablets and smartphones. This means that producers can be notified wherever they are that the work is complete. They can view the content on the device, add notes to the metadata, and either approve the content or send it back for further work.

“This development was suggested by one of our current major broadcast users, who saw a real operational requirement for it,” said Tony Taylor, chairman and CEO of TMD. “They wanted to tighten their workflows by getting producers to approve content as quickly as possible, wherever they were.

“Promo approvals is just the first application, though,” he added. “I am sure that when users get their hands on this then many more uses will be found. Because we have built it on open standards, including HTML-5, it is easy for us to extend the functionality if required, or to port it to any new device or operating system that may become popular in the future.”

i-mediaflex Mobile was launched at Broadcast Asia. It is currently in beta test with a major broadcaster, and will be released in the third quarter of 2012.