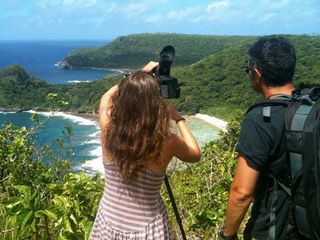 BOULDER, COLO.: The Oceanic Preservation Society recently purchased two Panasonic AG-3DA1 Full HD 3D camcorders to support production of its next feature documentary, the equipment maker said today. The OPS, which created “The Cove,” winner of the Oscar for Best Documentary in 2009, is doing a new project focused on mass species extinction precipitated by humans.

“The Singing Planet,” is directed by OPS Executive Director Louie Psihoyos, also director of “The Cove.” The project is “just moving into full production mode,” Panasonic said. “The filmmaking team has already had the Panasonic 3D camcorders on location in the South Pacific Ocean, where they documented the plight of humpback whales.” The producers also plan to make use of beam-splitter, parallel and underwater 3D production rigs.

“We’ve already seen that the 3DA1, because of its extreme mobility, can be our only option to opportunistically document an unplanned event,” said OPS Associate Producer Gina Papabeis.

The production is shooting 1080/24p, and plans to edit in CineForm’s Neo3D; the finish will be suited for theatrical release.