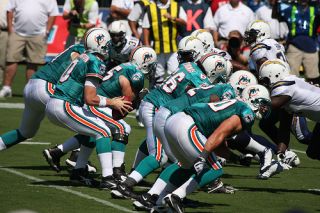 HIALEAH, FLA.: Telemundo is set to air its first live coverage of a National Football League game. The Spanish-language network will carry the Sunday, Sept. 26 match-up between the Miami Dolphins and the New York Jets in key markets. Telemundo is owned by NBC Universal; NBC is the current rights holder for “Sunday Night Football.”

Telemundo will carry NBC’s video feed of the game on owned-and-operated stations in New York, Los Angeles and Miami. Deportes Telemundo will provide its own Spanish-speaking team of commentators--Jessi Losada, Rene Girardo and Edgar Lopez. The event is being rebroadcast en Español in part to commemorate Hispanic Heritage Month. Singer Marc Anthony, a part owner of the Dolphins, will sing the national anthem.

“We are pleased to partner with NBC Sports and Telemundo to offer our Hispanic fans the Dolphins-Jets ‘Sunday Night Football’ game in English and Spanish,” said NFL Commissioner Roger Goodell. “This unique broadcast allows us to further connect with this passionate fan base in their language of choice, as we celebrate Hispanic Heritage Month. We are committed to delivering NFL content to our Hispanic fans and have an extensive reach in both English and Spanish through multiple platforms such as TV, radio, online, and in print.”

All of NBC’s Sunday night games are available in Spanish via secondary audio programming. The Sept. 26 event will be the first to feature the Spanish-speaking commentators in a separate feed for Telemundo. The network’s previous NFL programming included two weekly feature shows, two Super Bowl specials and two Kickoff Weekend specials. The 2009 regular season averaged 1.1 million Hispanic viewers per game, up 31 percent from the previous season.
-- Deborah D. McAdams