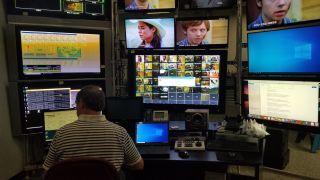 “I’ve replaced a master control system that I literally put in in 2005,” says Bruce Hart, vice president of engineering at TCT. “I’ve been maintaining it now for 15 years, looking for the right option to transition to and move forward.”

Hart found his replacement in the form of master control automation, Media Asset Management (MAM) and studio control automation from Aveco and the MediaMind AI engine from TVU Networks. Besides automating master control for TCT’s three network channels originating in Akron, Ohio, and 22 O&Os around the country, the hybrid MC-AI system proved to be the answer for other important challenges facing the broadcaster.

“I needed to solve three problems: closed captioning, populating a database with descriptions of our programming and archiving,” says Hart.

Not only does the transcription algorithm automatically generate accurate closed captions—thereby saving TCT on its captioning expense—but it also contributes to building a database of metadata along with the other three AI algorithms that together makes it possible for the broadcaster to derive other important benefits from its Aveco deployment, says Hart.

Integrated with the broadcaster’s 32 Aveco MAM seats, the TVU MediaMind AI algorithms are currently identifying unique characteristics that describe each frame of TCT’s 70,000 hours of programming. Currently stored on videotape, optical discs, individual hard drives and a RAID array, the archival content is bound for 925TB of storage and backup on sleeper disks from Alto under the orchestration of Aveco automation.

Unique identifiers, such as the facial features of people in shots, the shapes of objects in scenes, CG text burned into lower-thirds and speech translated to text, will one day make it possible to find desired footage from the entire archive in an instant, says Hart.

While that massive undertaking is going on in the background, the same set of algorithms is being used to create metadata for some 20 hours per week of live TCT programming, he adds.

“All of that footage will be available via a great portal for online [distribution] as well as for live program production,” says Jim O’Brien, president of Aveco.

When used for live production, the metadata will enable a show producer to search a topic being discussed on air, retrieve appropriate archival clips and choose the best one to enhance the live show—all in a matter of seconds, says Hart.

The TVU MediaMind-Aveco MAM hybrid also will put an end to the drudgery of manually completing quarterly FCC filings for TCT’s stations.

“That report is a very detailed thing, and it takes a full-time person to track down all the data the FCC requires for all of our 22 stations,” says Hart. “Now we can generate reports for each station automatically from the program data we are harvesting.”

While a significant time and money saver, today’s TVU MediaMind as currently configured is just a start. As new AI algorithms come along that prove to be useful to TCT, they can be integrated into the system to enhance metadata capture, adds Hart.

“With TVU’s AI interface module, we can use any commercially available artificial intelligence in the marketplace in conjunction with TVU’s own AI engine to ensure we are providing the maximum benefit,” says Kyle Luther, vice president of sales at TVU Networks.

TCT originally deployed a central-casting automation system to drive its hub-and-spoke model 15 years ago. With each passing month, it became ever more apparent the system, which relied on aging video servers running Microsoft Windows XP, was creaking ever closer to its demise. System reboots became a weekly occurrence, and reliability was sporadic, says Hart.

At the 2019 NAB Show in Las Vegas, Hart partnered with Ocon Solutions. Together he and Jim Ocon, president of the technology consultancy, identified the goal of relaunching TCT master control as an AI-driven platform—something both believed would be a first for the television industry.

Planning for the hybrid master control system began in earnest two months later as TCT separately began preparations for a major renovation of its network headquarters in Akron, says Hart.

The 26,000-square-foot facility has three studios, each equipped for productions enhanced by augmented reality (AR). One, a 40x30-foot studio, is outfitted with a Brainstorm InfinitySet for productions done on a virtual set.

The facility’s control room is equipped with a 4K-capable Grass Valley Kula production switcher that TCT currently uses for 1080p productions. Signal routing and transport is a mix of baseband and IP, says Hart.

Aveco’s centralized master control is at the heart of the new deployment. Responsible for network origination, control of each TCT station and two satellite dishes, the system is a night-and-day improvement for Hart.

“We will have one computer running the playlist for the three network channels and the 22 O&Os—25 playlists in total—running on a single screen that will have full control over every station and the network—all in one control room,” he says.

The system offers a “self-healing” feature that Hart found particularly attractive. “If a server fails, which is bound to happen, without having someone there watching the automation, the system will automatically switch to the backup and convert a server dedicated to recording to playout, change the router and put the video into the server so it plays out all on its own,” he says.

The Aveco system also controls the TVU MediaMind with respect to speech-to-text transcription turning it on when needed and off when not to control costs. “You pay for only what you need,” says Ocon. “When you don’t need to use the service, you can turn it off.”

For disaster recovery, TCT has deployed redundant systems at a site in Illinois, adds Hart.

As TCT planned the renovation and its new hybrid master control deployment, Hart kept in mind it was likely the television broadcaster would continue to grow. “We started out last year with 14 stations. We are at 22 today,” he says.

To do otherwise would diminish the broadcaster’s chance of winning viewers in markets targeted for expansion. “When you are new to a market, you’ve got one chance to do it right,” says Hart.

More information on Aveco, TVU Networks and Ocon Solutions is available on the companies’ websites.